‘We are no longer a country that is divided and isolated’ 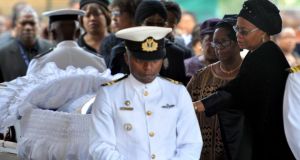 “Excuse me,” he said. “Do you know the way to Union Buildings; are you going there?”

Travelling through central Pretoria on public transport, I had even less of a clue where I was than he, but we struck up a conversation and decided to blunder our way together.

When someone like Nelson Mandela comes along and leaves in their wake a nation transformed utterly, its people deeply inspired, and a world left awestruck, besotted and uplifted, it is sometimes only possible to understand why by listening to one man’s story.

My bus pal was Desmond Saula and his is a sort of everyman’s story in South Africa; its significance is it its ordinariness, as it were.

Desmond is 31 years old and comes from Cape Town. When Mandela died, he decided he had to become part of what he knew would ensue. And so the day after the death was announced, Desmond left his home in the far south west of South Africa and travelled to Johannesburg. From there, he went the relatively short distance yesterday to Pretoria and today, he will begin to try to get to Qunu, about another 900 kilometres away in the south east, where Mandela will be buried.

For Desmond, this is a pilgrimage, his response to an urge he embraces with joy and purpose, an urge simply to be there, be part of it all, and to make his contribution by so doing.

Desmond is a first year law student and part-time photographer. He doesn’t carry a camera right now however because this is personal, not work.

Desmond’s grandparents came from the Eastern Cape. His grandmother was at home while Grandfather worked on the railways, laying tracks, doing hard labour. The couple moved to Deaar, a small town in the northern Cape that used to be a major railhead in South Africa.

Desmond’s father died young and so he was raised as an only child by his mother but with grandparents very much part of his life as well. His earliest memories of Mandela are those of a child.

“When I was growing up, my grandmother, whenever we mentioned the name Mandela, she wouldn’t say his name. She said ‘No! You can’t say that; you are going to be arrested’. This was the system then. According to the system then, Mandela was a terrorist. She was just trying to protect us. We were so young. . .”

The other sort of memory Desmond has is of children playing, being naughty scratching in the dust the spear logo of Umkhonto We Sizwe (the Spear of the Nation military wing of the African National Congress). Desmond was still a child when Mandela was released from prison. “I cannot say I took part in toi toi [protests] but I have these childish memories.”

But the memories are strong. When I ask how he felt when Mandela was freed, his eyes open very wide and his expression becomes animated.

“I watched on TV and everyone was so happy. This freedom everyone had been talking about for years was finally going to happen.”

The freedom was freedom from apartheid and freedom to be something else. Apartheid got inside people’s heads, as Desmond explains.

“It was normal for the black people to see themselves as inferior. You could be standing first in a queue and a white fellow would come along and you would stand aside for him because you believed he was superior. They brainwashed us.”

For Desmond, Mandela changed all that. “One of the things he stood for was that everyone must be equal. The struggle of humanity is a common one in the world and he is the symbol of this.”

There was never any question for Desmond but that he would go to every single event associated with Mandela’s week long funeral.

“I just could not come. Every step of the way. I want to tell this to my children. He was not an ordinary human being; he was extraordinary. When I heard of his death, something struck me. I wanted to be there physically. To me, his impact is so deep within me. I just could not let it go.

“I was there! I witnessed this! I want to add value in my own way. I can say that I was there physically.”

And so, the day after Madiba (Mandela’s clan name) died, Desmond went to Johannesburg and with his girlfriend from the city, went to Mandela’s old family home on Vilakazi Street in Soweto – now a Mandela museum.

“This was my first step. Just to have a connection,” he says. “I got to learn things [reading the story of Mandela and the ANC’s struggle on public signs in the area]. Those are things we as a younger generation must carry with us and live.”

There was a party atmosphere with people dancing and singing in the street and Desmond and his girl joined in. Next day, he went to Houghton, to Mandela’s last home, the home in which he died.

“I went there and I got the same atmosphere as in Vilakazi. People were celebrating with candles and flowers. I was there! I witnessed this and also how other people were impacted by this. This feeling is common, not just to me.”

On Tuesday, he went to the FNB Stadium sandwiched between Soweto and Johannesburg for the State Memorial Service. “The rain was coming down but it did not make any difference to people there,” he says.

For a long time, Desmond just stayed in his seat in the stadium, soaking it all in – the crowds, the gospel choir, the triple stage packed with dignitaries from the South African government and from all over the world.

“Now we are this one rainbow nation and all the world is here. We are no longer a country that is divided and isolated from the world. We are at one with the world and the problems of South Africa are not unique.

“And to be part of that, to be there, that was important.”

He forgives the booing and jeering of current South Africa president Jacob Zuma but says what happened shows that many people do not like him.

And so yesterday, Desmond’s personal pilgrimage brought him to Pretoria, federal capital of old South Africa and also of contemporary South Africa; to the Union Building Amphitheatre – renamed by President Zuma as the Nelson Mandela Amphitheatre – to see the mortal remains of his hero, lying in state in parliament.

“I’m so crossing my fingers,” Desmond said as we shared a cup of coffee. “I might not get the chance [to get in]. They will allow in a certain number of people at a time and I just hope I am one.

“I want to witness his remains, to pay my last respects and witness this great man.”

If Desmond has to wait three days, I think he will get in.

And then, somehow, he will get to Qunu for Sunday’s burial.

Any one of the thousands of people saying goodbye to Mandela over these days could tell Desmond’s story, or their personal version of it, and what propels them to come, to witness, to be part of it all. His story is by no means unique but it is massively important to him, as are all similar stories to all the people queuing.

And that is why this week and this man are massively important to this country.