Victims and ICC the losers as Kenyatta trial collapses

ICC humiliated by collapse of three-year pursuit of Kenyan president 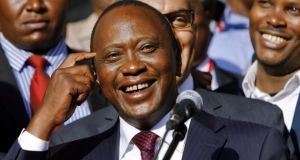 Kenyan president Uhuru Kenyatta: described the ICC case against him, which collapsed on Friday, as “a travesty”. Photograph: Daniel Irungu/EPA

As the 122 countries that support the International Criminal Court meet in New York today, ringing in their ears will be the denunciation of Kenyan president Uhuru Kenyatta, who described the ICC case against him, which finally collapsed on Friday, as “a travesty”.

There’s a packed agenda for the week-long meeting of the Assembly of States Parties, including, ironically, the election of six new judges. But one issue cuts right to the future of the court: how the most high-profile case in its 12-year history became such an embarrassment.

Kenyatta pleaded not guilty to five counts of crimes against humanity, including murder and rape, for allegedly masterminding post-election violence in 2008. Some 1,200 people were slaughtered and another 600,000 displaced.

“What those statistics actually mean is that men were beheaded in the streets and their heads paraded on sticks,” said Fergal Gaynor, counsel for the victims, who’s attending the assembly. “Women were serially raped, then doused in paraffin and set alight. Children were burned alive.

“The surviving victims’ quest for justice has been cruelly frustrated, in Kenya and now at the ICC,” Gaynor told The Irish Times. “Targeted for no reason other than their ethnicity, thousands still live in abject poverty, uncompensated for the destruction of their homes and their families. They have received almost nothing from the entire ICC process.”

Kenyatta was indicted in 2011 and elected president in 2013. After three years of pursuing a case which became less and less watertight, the ICC’s chief prosecutor on Friday was forced to withdraw all charges without them ever reaching trial.

According to Kenyatta, that happened because he was innocent and “vindicated” by the collapse of charges which were “obviously deficient”.

He added: “My conscience is absolutely clear. Just as the ICC failed me, it also failed the victims of the 2007-2008 violence.”

Not so, said Fatou Bensouda, the ICC’s chief prosecutor, who made clear on Friday that she was withdrawing the charges “without prejudice to the possibility of bringing a new case should additional evidence become available”.

“Contrary to the Government of Kenya’s pronouncements,” she said in a statement, “what this ruling confirms is that it has breached its treaty obligations under the Rome Statute by failing to co-operate with my investigation.”

For what it’s worth, those comments are clearly aimed at turning the spotlight back onto Kenya, one of 34 African signatories to the Rome Statute setting up the court, when its delegates arrive at the assembly in New York.

Irrespective of who is responsible, however, the harm is done.

The big losers are the 20,000 victims of Kenya’s ethnic violence and the ICC itself, which has arguably proved itself incapable of coping with the geopolitical context in which its cases are set.

Leaving aside any damage to the ICC’s legitimacy, Redress, a charity that supports torture victims, observed: “Effectively the court is saying: our powers to compel a state to co-operate are limited, so we won’t even try”.

The question for the global court is: what is to stop this happening again?