US withholds part of major aid package for Egypt 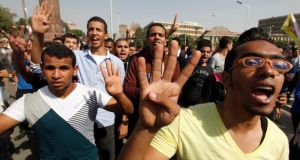 Cairo university students and members of the Muslim Brotherhood shout slogans against the military in front of Cairo University in Cairo earlier this week. Photograph: Mohamed Abd El Ghany/Reuters

The US said last night it would withhold deliveries of tanks, fighter aircraft, helicopters and missiles as well as $260 million (€192 million) in cash aid from Egypt’s military-backed government, pending progress on democracy and human rights.

Egypt has criticised the change in policy. “The decision was wrong. Egypt will not surrender to American pressure and is continuing its path towards democracy as set by the roadmap,” Foreign Ministry spokesman Badr Abdelatty told a private Egyptian radio station today.

The decision, described by US officials, demonstrates US unhappiness with Egypt’s path since its army on July 3rd ousted Mohamed Morsi, who emerged from the Muslim Brotherhood last year to become Egypt’s first democratically elected leader.

But the State Department said it would not cut off all aid and would continue military support for counterterrorism, counter-proliferation and security in the Sinai Peninsula, which borders US ally Israel.

It also said it would continue to provide funding that benefits the Egyptian people in such areas as education, health and the development of the private sector.

The split decision illustrates the US dilemma in Egypt: a desire to promote democracy and human rights along with a need to co-operate with a nation of strategic importance because of its control of the Suez Canal, its 1979 peace treaty with Israel and its status as the most populous nation in the Arab world.

“We will ... continue to hold the delivery of certain large-scale military systems and cash assistance to the government pending credible progress toward an inclusive, democratically elected civilian government through free and fair elections,” State Department spokeswoman Jen Psaki said in a statement.

The military-backed authorities have cracked down hard on the Brotherhood since ousting Mr Morsi. On August 14th, security forces smashed two pro-Morsi sit-ins in Cairo, with hundreds of deaths, and then declared a state of emergency and imposed a curfew. Many of the Brotherhood’s leaders have been arrested since.

Jon Alterman, director of the Middle East programme at the Center for Strategic and International Studies think-tank in Washington, said it was doubtful Washington would gain any leverage over Cairo by withholding the aid.

“It may make some Americans feel better about the US role in the world, but it’s hard to imagine how it changes how the Egyptian government behaves,” he said.

Some lawmakers criticised the administration’s decision.

“The administration is trying to have it both ways, by suspending some aid but continuing other aid. ... The message is muddled,” said Senator Patrick Leahy, a Vermont Democrat who chairs the Senate Appropriations Committee panel that funds such aid.

“Pulling away now may undermine the ability of the United States to work with a critical partner,” said Representative Kay Granger, the Texas Republican who chairs the House Appropriations Committee’s panel on foreign assistance.

As if to underscore the divide, the Saudi Embassy in Washington released a statement noting that Saudi King Abdullah had met Egyptian interim President Adly Mansour in Jeddah.

“We will support Egypt against terrorism, sedition, and those who try to undermine its security,” King Abdullah said during the meeting, according to the statement.

On September 24th, President Barack Obama said Washington would keep working with the interim authorities in Cairo, but faulted them for anti-democratic moves such as the emergency law and restrictions on opposition parties, the media and civil society.

Speaking to reporters in a conference call, US officials said the United States would withhold deliveries of M1A1 Abrams tank kits made by General Dynamics Corp, F-16 aircraft produced by Lockheed Martin Corp, and Apache helicopters and Harpoon missiles built by Boeing.

The materiel withheld was worth hundreds of millions of dollars, the officials said, but stressed that its suspension was not meant to be permanent and would be reviewed periodically along with Egypt’s progress on human rights and democracy.

US defence secretary Chuck Hagel called Egyptian army chief General Abdel Fattah al-Sisi to tell him about the US decisions, speaking for about 40 minutes in what one US official described as a friendly conversation.

Mr Hagel stressed the relationship’s importance but underscored the US view that Egypt must move toward democracy.

Egypt for decades has been among the largest recipients of US military and economic aid because of its 1979 peace treaty with US ally Israel, which agreed as a result of the pact to withdraw from the Sinai Peninsula it seized from Egypt in 1967.

The US has long provided Egypt with about $1.55 billion in annual aid, including $1.3 billion for the military.