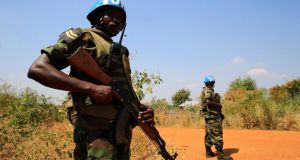 A mass grave containing some 75 bodies has been found in South Sudan’s Unity State and two other mass graves have been reported in Juba after ethnic violence, the United Nations said.

UN High Commissioner for Human Rights Navi Pillay today called on both sides to protect civilians and warned that political and military leaders could be held to account for crimes.

“Mass extrajudicial killings, the targeting of individuals on the basis of their ethnicity and arbitrary detentions have been documented in recent days,” Pillay said in a statement. “We have discovered a mass grave in Bentiu, in Unity State, and there are reportedly at least two other mass graves in Juba.”

A spokeswoman said that the bodies of 75 soldiers of the Sudan People’s Liberation Army were believed to be in the mass grave in Bentiu visited by UN rights officers.

UN secretary-general Ban Ki-moon yesterday sought to nearly double the size of the UN peacekeeping force in South Sudan, as rebel leader Riek Machar and president Salva Kiir both indicated they were ready to talk to try to end a deepening conflict that has killed hundreds of people.

A government official, however, said South Sudan would not meet Mr Machar’s demand that detained opposition leaders be released.

Mr Ban asked the UN Security Council to send 5,500 more peacekeepers to South Sudan as soon as possible to protect civilians from the growing violence in the world’s newest country. There are now some 6,700 UN troops and 670 police officers making up the UN force in South Sudan.

Speaking from “the bush,” Mr Machar told Reuters he had spoken to US national security adviser Susan Rice and UN envoy Hilde Johnson about trying to end fighting that has killed hundreds of people and driven thousands from their homes.

“My message was let Salva Kiir release my comrades who are under detention and let them be evacuated to Addis Ababa and we can start dialogue straightaway, because these are the people who would (handle) dialogue,” he said by telephone.

Among those Mr Machar listed should be released were Pagan Amum, chief negotiator during the recent oil shutdown with Sudan, which hosts the sole oil export pipeline; and Rebecca de Mabior, the widow of former South Sudanese leader John Garang.

“They are criminals who must be brought to the books, so there is no way we can negotiate with (Machar),” information minister Michael Makeui said. “We are only ready to negotiate with him unconditionally.”

He dismissed Mr Machar’s suggestion that the peace talks be held in Ethiopian capital, Addis Ababa, insisting they take place in Juba.