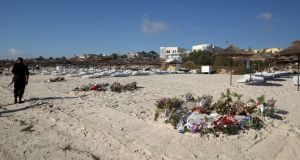 The Sousse beach massacre in June in which 38 people were killed has been linked to previous terror attack carried out at the National Bardo Museum outside the capital Tunis in March. Photograph: Steve Parsons/PA Wire

The massacre of 38 tourists on a Tunisian beach is being linked to an earlier terror attack in the country which killed 22 people, Scotland Yard said on Thursday.

The attack in June by gunman Seifeddine Rezgui came just months after 22 people, mostly tourists, were killed at the National Bardo Museum outside the capital Tunis in March.

Commander Richard Walton, of the Metropolitan Police which supplied officers to help the Tunisian investigation into the massacre, said: “We are now linking evidentially the Bardo Museum investigation with the Sousse investigation.”

He did not provide more details of the suspected connection but said it was based on “strong” evidence.

In the aftermath of the Sousse attack, Tunisian officials said Rezgui trained in neighbouring Libya at the same time as two attackers who targeted the Bardo museum in March.

Mr Walton, head of Met’s Counter Terrorism Command, declined to provide details of the connection, only saying: “It is strong evidence that links the two.”

He said a team of officers are working closely with the Tunisian authorities on both inquiries and the coroner in the UK has been told about the link.

Scotland Yard revealed that British officers have taken a total of 459 witness statements since the day of the beach attack in June.

A number of witnesses have referred to a second gunman wearing red shorts.

Investigators said that although they retain an open mind, they now believe the person identified was a beach security worker who attempted to stop the gunman.

More than 370 photograph and video files from mobile devices are being assessed by detectives, while specialist advisers have been sent to Tunisia as authorities in the country review security at resorts and tourist attractions.

They have carried out operations across the country to disrupt terrorist activity and identify suspects, he said.

Those charged face allegations including being involved in a terrorist plot, not informing police of a plan and providing logistical or other support.

A trial in relation to the murders is not expected to take place for up to 18 months.

Mr Walton also disclosed that Rezgui’s body has not been claimed due to the shame his family feel and fear of reprisals if they do so.