Two injured in explosion on passenger jet in Somalia 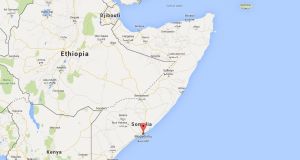 Flight D3159 was taking off from Mogadishu on Tuesday when the explosion occurred. Photograph: Google Maps

Two passengers were injured in an explosion that blew a hole in the fuselage of a commercial plane taking off from Mogadishu on Tuesday, an airline representative said.

There was no immediate explanation for the explosion from the airline or Somali government officials.

“Daalo airline was enroute to Djibouti but it landed shortly after it took off. A fire exploded and two passengers were slightly wounded,” said Mohamed Hussein, an agent for Daallo Airlines, the operator of the flight.

Photos of the damage to Daallo airlines taken after the emergency landing. Two passengers were injured. #Somalia pic.twitter.com/2A5XTyOajm

Daallo flies to several destinations in the Horn of Africa and the Middle East, its website showed.