Rwanda’s president to seek a third term in 2017 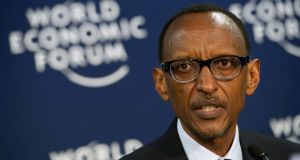 Paul Kagame: he has been president since 2000 but has been in control since 1994. Photograph: Johannes Eisele/AFP/Getty Images

Rwandan president Paul Kagame has announced his intention to seek a third term in 2017, confirming a decision that was widely expected following the approval of constitutional changes that could allow him to stay in office for years to come.

“You requested me to lead the country again after 2017. Given the importance and consideration you attach to this, I can only accept,” Kagame said today in a televised address to the nation. “But I don’t think that what we need is an eternal leader.”

Kagame has been president since 2000 but he has effectively been in control since his rebel force marched into Kigali to end the 1994 genocide.

He was originally limited to two terms, but in 2015 Rwanda approved changes to the constitution that would effectively allow Kagame to stay in power until 2034, if he wins elections.

Kagame has insisted for months he had yet to make up his mind about whether to run in the 2017 election.

A voter referendum on the change, which drew the backing of 98 per cent of those casting ballots, prompted criticism from western powers who worry about the growing list of African leaders who have been seeking to extend their time in office.

Neighbouring Burundi was plunged into chaos in April when President Pierre Nkurunziza’s announcement he would seek a third term sparked months of street protests and violence that has left at least 400 people dead. He later won in a disputed vote.

Rights groups acknowledge Kagame has broad support for rebuilding the nation but accuse the authorities of stifling the media and opposition voices, charges the government denies.

The United States, which has long praised Kagame for transforming the nation since the 1994 genocide, said the president could best serve his nation by stepping down in 2017.

The European Union criticised the speed at which the referendum vote was held, saying it did not give enough time for the public to consider the arguments. The referendum took place about a month after Rwanda’s parliament gave its final approval to the changes.

There is only one real opposition party in Rwanda. The Democratic Green Party, which is tiny and has no seats in parliament, had its bid to block the constitutional amendments rejected in the courts.

The constitutional changes allow Kagame to run for another seven-year term in 2017, followed by two five-year terms afterwards.