Rwanda remembers: ‘It simply should never have happened’

Commemorations focused on themes of remembrance, unity and renewal 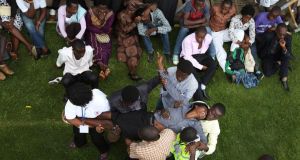 Ushers carry a distraught woman out of Amahoro Stadium during the 20th anniversary commemoration of the 1994 genocide in Kigali. Photograph: Getty Images 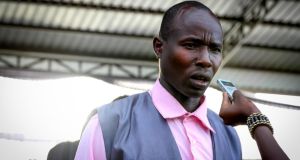 Dominic Mukeshimana: “I have asked for forgiveness to my God and to my country and they have forgiven me.” 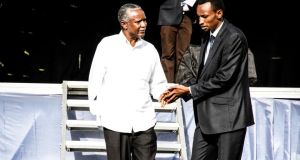 Venuste Karasira: “We were killed using all kinds of killing machines up until late that night. Out of four or five thousand, 100 survived.”

Twenty years ago an estimated 800,000 Rwandans were killed in just 100 days. The killings were planned and methodical, carried out by neighbours, by colleagues, by friends.

The theme for this year’s commemorations in Rwanda is “Kwibuka”, or “remembrance”. “Kwibuka20” signs with the slogan “Remember – unite – renew” are hung prominently all over capital, Kigali.

A flame of remembrance has been taken to every district in the country over the past few months, finishing its journey yesterday, 20 years exactly since the eruption of violence.

Rwandan president Paul Kagame received the flame at the Kigali Memorial Centre, laid a wreath and lit another flame of mourning, which will burn for the next 100 days.

The event opened with testimony from a genocide survivor. As it progressed wails from the crowd became audible. Several dozen attendees had to be carried out by stewards as emotion overpowered them.

There has been an emphasis in recent days that this was not an isolated incident. At the weekend an international forum discussed issues such as genocide denial, hate media and how to adopt legislation to achieve justice after a major incident such as genocide.


Criticism
The behaviour of the international community has drawn criticism. The withdrawal of UN peacekeepers during the genocide was acted out in a performance at Amahoro Stadium, which ended in soldiers coming to bring fallen Rwandans back to life.

Their departure in 1994 was also addressed on Saturday by former UN Assistance Mission for Rwanda deputy commander Henry Kwami Anyidoho, who said: “I have asked again and again, why did the world abandon Rwanda? I have never found an answer.”


Diplomatic incident
On Saturday French justice minister Christiane Taubira cancelled her plans to attend the events in light of Mr Kagame’s claim, in a recent interview, that France had played a “direct role” in the genocide.

In his speech at Amahoro Stadium, Mr Kagame made reference to the tensions: “People cannot be bribed or forced into changing their history.”

The events emphasised unity. “We did not need to experience genocide to become a better people, it simply should never have happened,” said Mr Kagame. But he added: “We made choices that guide us to this day. We chose to stay together.”


Testimony of genocide
The survivor: Venuste Karasira
Venuste Karasira is nearly 62, and is missing his right arm. When the violence began on the April 7th, 1994, he and his family took refuge in a school that the Belgian peacekeepers were protecting.

On April 11th they saw the Belgians packing up their bags.

“I remember one of us asking for a few guns so we could protect ourselves, but they refused. We asked young people to lie down in front of them. Do you know what they did then? They fired their guns in the air, and their way was clear.”

After that the genocidaires arrived almost immediately, and were ordered to “start the work”.

“We were killed using all kinds of killing machines up until late that night. Out of four or five thousand, 100 survived.”

He thinks the 20th anniversary commemorations are painful but vital.

“When you remember you remember that bad things happened, but we are fighting to make it good. Reconciliation is a process, but it will come.”

The genocidaire : Dominic Mukeshimana
Dominic Mukeshimana says he grew up in a society that belittled and discriminated against Tutsis. When the genocide began, he participated without questioning it. “Our parents got us involved. Many young people, I would tell them never to listen to such an appeal.”

After the RPF victory, he realised what he had done, and he wanted to take his own life. “I took some electrical wires so I could be electrocuted.”

In search of solace, he went to see the people whose relatives he killed to apologise to them. But after he spoke out he says his accomplices began threatening him. “I couldn’t even go to church any more.”

He says education has saved him. He was uneducated before but now, at 48, he is attending primary school, “in the same class as my first-born daughter”. He also believes he has found forgiveness. “The people I have assaulted have become my friends. I have asked for forgiveness to my God and to my country and they have forgiven me.”