Zuma asks president to speak on behalf of Ireland and Europe 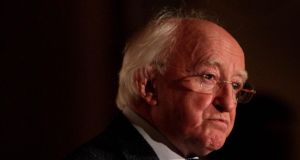 President Jacob Zuma asked President Higgins to speak on behalf of Ireland and Europe. The President rose to the occasion, delivering what some of those present said was a well-received tour de force that set the tone for speakers from other regions of the world.

The President spoke from a handful of green pages on which he jotted down a few thoughts.

Speaking afterwards, he said the man whom they had all come to honour had “an extraordinary grace when he entered a room”.

“Behind that was a set of moral convictions which had been very carefully honed through his long period in prison,” said President Higgins.

“I suggested that there was a great sense of humanity, not yet fully realised, in the speeches, particularly in the later years. I was very moved myself over the last week when, I think it was Archbishop Tutu who said, thank you Madiba for reminding us of what we might be.”

The President, who flew back to Dublin overnight to be present for events today marking the 20th anniversary of the signing of the Downing Street Declaration, said that Mr Mandela presented the world with “a powerful combination of head and heart”.

“The message that he brought around the world was one that we could realise our unrealised possibilities.”

The President suggested to other world leaders, who came from all continents, that the best tribute they could make to Mr Mandela was to strive to achieve his goals.

Remarking on the week’s funeral rites, President Higgins said foreign dignitaries had come “in a solidarity of grief”.

Some 30,000 people in South Africa have Irish passports and trade and tourism links between the two countries are well established. President said he would like to see those develop further.

South African government officials were keen to learn from Ireland in the areas of education and hi-tec industry.