Over 150 killed in Somalia air strike on al Shabaab - US 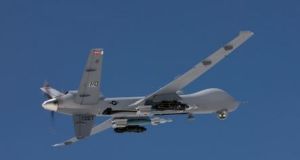 More than 150 people were killed in a US air strike on a Somali jihadist camp at the weekend, the Pentagon said on Monday.

The US military mounted the strike, using both manned and unmanned drone aircraft, targeting the “Raso” training camp run by Somali Islamist group al Shabaab, about 120 miles north of the Somali capital, Mogadishu.

The Pentagon said those killed were combatants.

The US military said it had been monitoring the camp for several weeks and had gathered intelligence, including on an imminent threat posed by the militants.

“We know they were going to be departing the camp and that they posed an imminent threat to US and to Amisom, African Union mission in Somalia forces, that are in Somalia,” said Pentagon spokesman Captain Jeff Davis.

Capt Davis declined to disclose any specific information the US might have about the group’s intended target.

The al-Qaida-linked al Shabaab was pushed out of Mogadishu by African Union peacekeeping forces in 2011 but has remained a potent antagonist in Somalia, launching frequent attacks in its bid to overthrow the Western-backed government.

The group, whose name means “The Youth”, seeks to impose its strict version of sharia law in Somalia, where it frequently unleashes attacks targeting security and government targets, as well as hotels and restaurants in the capital.

Al Shabaab was also behind deadly attacks in Kenya and Uganda, which both contribute troops to an African Union peacekeeping force in Somalia.

Capt Davis said as many as 200 fighters were believed to be training at the Raso camp at the time of the strike, and expressed confidence there were no civilian casualties.

“Their removal will degrade al Shabaab’s ability to meet the group’s objectives in Somalia, which include recruiting new members, establishing bases and planning attacks on US and Amisom forces there,” Capt Davis said.

No US forces on the ground participated in the strike. “It was an air operation,” he added.