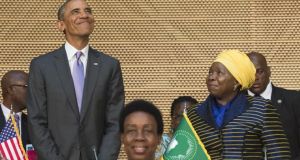 Barack Obama has made a scathing attack on Africa’s culture of presidents-for-life, urging the continent’s leaders to follow the example of George Washington and Nelson Mandela by respecting term limits, and saying of himself: “I think if I ran I could win, but I can’t.”

The US president, addressing the African Union (AU) on Tuesday at its headquarters in Addis Ababa, Ethiopia, at the close of a four-day visit to east Africa, also repeated his impassioned plea for girls to be treated equally and not suffer mutilation of their bodies.

The fragility of Africa’s recent democratic gains has been exposed by the decision by the Burundian president, Pierre Nkurunziza, to override the constitution and gain election for a third term in a disputed victory, plunging the country into civil strife. Similar moves are afoot in Congo-Brazzaville, the Democratic Republic of the Congo and Rwanda.

“I have to say, Africa’s democratic progress is also at risk from leaders who refuse to step aside when their terms end,” Mr Obama told delegates from across the continent.

“Let me be honest with you. I just don’t understand this. I am in my second term . . . I love my work, but under our constitution I cannot run again. I actually think I’m a pretty good president. I think if I ran I could win, but I can’t.

“There’s a lot that I’d like to do to keep America moving, but the law’s the law and no one person is above the law, not even the president,” Mr Obama said.

He said he was puzzled why some African leaders clung to office, “especially when they’ve got a lot of money”, prompting huge cheers and whistles from the public gallery.

The president continued: “When a leader tries to change the rules in the middle of the game just to stay in office, it risks instability and strife, as we’ve seen in Burundi. And this is often just a first step down a perilous path. But if a leader thinks they’re the only person who can hold their nation together . . . if that’s true, then that leader has failed to truly build their nation.

Africa is still replete with leaders unwilling to let go. Teodoro Obiang Nguema Mbasogo and José Eduardo dos Santos have ruled Equatorial Guinea and Angola, respectively, for 36 years. Zimbabwean president Robert Mugabe in power since 1980, was not invited to Mr Obama’s speech despite being the current AU chairman.

“It’s a new pushback against the gains made in the ’90,” said Muthoni Wanyeki, regional director of Amnesty International. “Many then, in a period that was seen as Africa’s second liberation, created term limits. But now these terms are coming to an end, and they’re determined to hold on to power by any means.”

Hallelujah Lulie, a researcher at the Institute for Security Studies in Ethiopia, said: “There are many countries with no term limits, but we have to start by respecting the constitutions where term limits are clearly set. If you look at the past five years, it has been a source of instability and insecurity, so it’s good he addressed it.”

“Africa is the beautiful, talented daughters who are just as capable as Africa’s sons,” he said. “As a father, I believe that my two daughters ought to have every chance to pursue their dreams, and the same goes for girls here in Africa.”

Female genital mutilation affects more than 130 million girls and women around the world. Most of the 29 countries that carry it out on girls are in Africa, and include Ethiopia. The practice carries a risk of severe bleeding, problems urinating, infections, infertility and complications in childbirth.

“When African girls are subjected to the mutilation of their bodies, or early or forced marriage, that sets us back, and it needs to end.” the president said. “When more than 80 per cent of new HIV cases in the hardest-hit countries are teenage girls, that’s a tragedy and it sets us back.”

The US was beginning a partnership with 10 African countries (Kenya, Lesotho, Malawi, Mozambique, South Africa, Swaziland, Tanzania, Uganda, Zambia and Zimbabwe) to keep teenage girls safe and Aids- free, he said. First lady Michelle Obama is leading an education and health campaign, including a new initiative in Tanzania and Malawi.

“Let’s lift up the next generation of women leaders who can help fight injustice and forge peace and start new businesses and create jobs – and probably hire some men, too,” the president said. “We’ll all be better off when women have equal futures.”