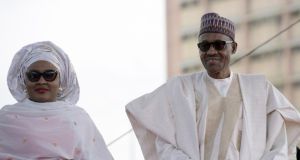 New Nigerian president Muhammadu Buhari has vowed to eradicate the “mindless, godless” militant group Boko Haram and rescue hundreds of women and children held captive, including 200 girls taken from the town of Chibok a year ago.

In his inaugural address as elected leader of Africa’s most populous nation, Mr Buhari also painted a picture of an economy in crisis after this year’s collapse in the price of oil, which accounts for the bulk of state revenue.

“The armed forces will be fully charged with prosecuting the fight against Boko Haram,” the 72-year-old former military ruler announced in the heart of the capital.

A Muslim, he said the group was “as far from Islam as one can think of”.

“We cannot claim to have defeated Boko Haram without rescuing the Chibok girls and all other innocent persons held hostage,” he said. “This government will do all it can to rescue them alive.”

Hundreds of other Boko Haram captives have been freed by the military in recent weeks, but the Chibok girls, whose capture caused a global outcry, have still not been found.

Mr Buhari’s March election win was Nigeria’s first democratic transfer of power. He inherits a host of problems from his predecessor Goodluck Jonathan, whose five-year tenure was marked by aimless security and foreign policy-making, as well as corruption scandals.

He made no mention of the naira, the currency, which economists say may be headed for another devaluation.

Importantly, he held out an olive branch to his political opponents in the oil-rich Niger Delta, saying his administration would continue to invest heavily in projects in the region that have underpinned an amnesty by militant groups there.

Three decades after he first came to power in a military coup, Mr Buhari’s swearing-in marks a remarkable political turn-around from authoritarian ruler to born-again democrat following his landslide victory at the ballot box in March.

His oath was followed by the release of dozens of white doves, symbolising peace. Many of Nigeria’s 170 million people also interpreted it as turning the page on five years of disappointment and frustration under Mr Jonathan.

“Jonathan was so bad, very bad. Now the incoming president will do something for us,” said Mutawali Bukar, a businessman from the northeast city of Maiduguri, the epicentre of the Boko Haram insurgency.

The spirit of optimism is, however, tempered by the reality in which Nigeria finds itself, and much depends on Mr Buhari’s choice of ministers, particularly in key portfolios such as finance, internal security and oil.