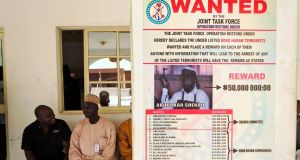 Islamist sect Boko Haram has intensified its attacks on security forces and government targets in its northeast stronghold this month, prompting Jonathan to declare an emergency in Borno, Yobe and Adamawa states.

“We are facing ... a rebellion and insurgency by terrorist groups which pose a very serious threat to our national unity,” Mr Jonathan said in a televised address.

“They have attacked government buildings and facilities. They have murdered innocent citizens and state officials. They have set houses ablaze, and taken women and children as hostages. These actions amount to a declaration of war.”

Security officials say they control at least 10 local government areas of northeastern Borno state, the epicentre of the insurgency.

Dozens of Boko Haram fighters in buses and machine gun-mounted trucks laid siege to the town of Bama, in Borno, last week, freeing over 100 prison inmates and leaving 55 people dead, mostly police and other security forces.

Days earlier, scores were killed in the fishing village of Baga, also in Borno, on the shores of Lake Chad, when troops from Nigeria, Niger and Chad raided it looking for Islamists. Local residents said soldiers were responsible for many civilian deaths.

Mr Jonathan ordered his chief of defence to deploy extra soldiers to the states.

The decree is likely to bring him into conflict with the powerful governors and northern leaders, with whom he already has a tense relationship.

On Monday, the Nigeria Governors’ Forum, representing the governors of Nigeria’s 36 states, warned Jonathan against imposing emergency rule in response to the insurgency.

Umar Gusau, spokesman for the Borno state Governor Kassim Shettima, declined to comment on the decree. Other influential northern figures were against it.

“It’s not the right thing to do,” said Bashir Tofa, a former presidential candidate and northern politician.

Boko Haram and other Islamist groups such as al Qaeda-linked Ansaru have become the biggest threat to stability in Africa’s second biggest economy and top oil exporter.

Boko Haram leader Abubakar Shekau said in a video this week that the group had kidnapped several women and children in retaliation against security forces who, it says, have detained the wives and children of its members without just cause.

In December 2011, Mr Jonathan declared a state of emergency over some limited local government areas in the states, after a church bombing blamed on Boko Haram killed 37 people, but he lifted it in July last year.

There has been an uptick in violence in other regions of Nigeria too, with 46 police officers killed by gunmen in an ambush in the central state of Nassarawa last week. Officials blamed a local cult not linked to Islamists.