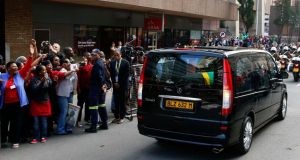 The hearse carrying the coffin of former South African President Nelson Mandela travels through a street in Pretoria, this morning, on its way to the Union Buildings, where his coffin will lie in state for three days. Photograph: Yves Herman/Reuters 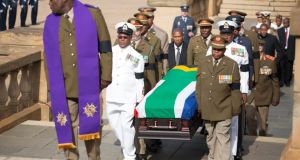 Military officers carry the coffin of Nelson Mandela to the Union Buildings marking the start of the three-day lying in state. Photograph: EPA/Marco Longari/Pool

The streets were lined with people who had gathered to watch the procession make its short journey from Military Hospital to the Union Buildings in the capital Pretoria.

Mr Mandela’s remains will lie in state for three days, with thousands of people expected to pay their respects to him every hour, according to local media.

Meanwhile a public memorial service in London today will remember the life of the anti-apartheid leader.

The service will be held at St Martin-in-the-Fields in Trafalgar Square from 10.30am at the request of the South African High Commission, feet away from the church.

The two share strong links and were the scene of freedom vigils for Mr Mandela during his incarceration.

Speaking at the service will be Sir Sydney Kentridge QC and Lord Joffe of Lidington, who both represented Mr Mandela at his treason trials, and campaigner and African National Congress veteran Mama Thembi Nobhadula.

Soldiers in formal uniforms carried the coffin into the Union Buildings to a special viewing centre built inside the building’s amphitheatre, which President Jacob Zuma named after Mr Mandela by decree yesterday.

Mandela family members, government officials and world leaders are expected to pass by the coffin.

Each day, Mr Mandela’s coffin will be driven back to 1 Military Hospital to be held overnight.

Mr Mandela’s body will be flown on Saturday to Qunu, his home in the Eastern Cape Province.

Mr Mandela will be moved to his final resting place on Sunday, when he will be buried at his childhood village of Qunu in Eastern Cape Province.

Barack Obama yesterday led tributes to Mr Mandela as world leaders joined thousands of people at a memorial service in the rain-soaked FNB Stadium in Soweto.

The US president spoke of the “heroic” life of the South African leader, describing him as the “last great liberator of the 20th century” and compared his actions to those of Mahatma Gandhi, Abraham Lincoln and US civil rights leader Martin Luther King.

But he also warned against viewing Mr Mandela as detached from normal life.

“He was not a bust made of marble, he was a man made of flesh and blood,” Mr Obama told the crowds.

“It was precisely because he could admit to imperfection, because he was so full of good humour, even mischief despite the heavy burdens that he carried, that we loved him so,” he said.

“He was not a bust made of marble, he was a man of flesh and blood, a son and a husband, a father and a friend — that is why we have learned so much from him and that is why we can learn from him still.

“Nothing he achieved was inevitable. In the arc of his life, we see a man who earned his place in history through struggle and shrewdness and persistence and faith.”

Mr Obama’s speech came after he shook hands in the stadium with Cuban president Raul Castro, the first such greeting in public involving a president of the US since the Cuban revolution. The former US president Bill Clinton reportedly shook hands in private with Raul’s brother Fidel behind closed doors at a UN lunch in 2000.

During the service in the two-thirds filled stadium, boos were heard for the current South African president Jacob Zuma and the former US president George W Bush. But there were cheers for Mr Obama and for Zimbabwean president Robert Mugabe.

Mr Mandela, described at one time as the world’s most famous political prisoner, was released after 27 years in jail in 1990 and went on to become South Africa’s first black president. He died last Thursday aged 95.

The service, marked by heavy rain, heard from Andrew Mlangeni, a former prisoner on Robben Island with Mr Mandela, who spoke of the “outpouring of love” following his death.

“Madiba is looking down on us. There is no doubt he is smiling and he watches his beloved country, men and women, unite to celebrate his life and legacy,” he said.

UN secretary-general Ban Ki-moon told the service: “South Africa has lost a hero, we have lost a father and the world has lost a beloved friend and mentor.

“Nelson Mandela was more than one of the greatest leaders of our time, he was one of our greatest teachers. He taught by example, he sacrificed so much and was willing to give up everything for freedom, equality and justice.

“His compassion stands out most.”

Mr Zuma, addressing the service, said: “Today Madiba is no more. He leaves behind a nation that loves him dearly. He leaves a continent that is truly proud to call him an African.

“He leaves the people of the world who embraced him as their own ... icon. Most importantly, he leaves behind a deeply entrenched legacy of freedom, human rights and democracy in our country.

“In his honour we commit ourselves to continue building a nation based on the democratic values of human dignity, equality and freedom. United in our diversity we will continue to build a nation free of poverty, hunger, homelessness and inequality.”

Speaking to the BBC, Mr Blair said the service was “extraordinary”.

“He was always reaching out to people, always trying to reconcile them and bringing people together and he did it in a way where there was something quite transcendent about it,” Mr Blair said.