Mandela hailed as ‘last great liberator of the 20th century’

U.S. President Barack Obama shakes the hand of Cuban President Raul Castro at a memorial for Nelson Mandela, a rare gesture between the leaders of two nations at loggerheads for more than half a century. 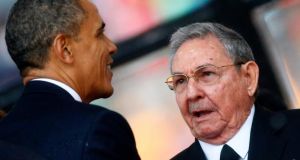 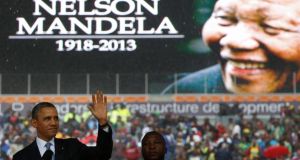 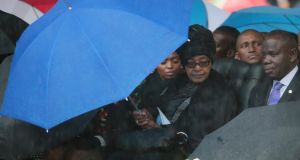 US President Barack Obama has led tributes to Nelson Mandela urging the world to use the celebration of his life as a period of “self-reflection.”

The US president spoke of the “heroic” life of the South African anti-apartheid hero describing him as the “last great liberator of the 20th century” as he addressed thousands gathered for the memorial service to Mr Mandela in the FNB Stadium in Soweto.

“He was not a bust made of marble, he was a man made of flesh and blood,” Mr Obama told the crowds in the stadium including leaders from more than 90 countries gathered at the stadium.

Mr Obama further singled out world leaders who have publicly welcomed gains made by Mr Mandela but resist reforms to tackle inequality and injustice.

“Around the world today we still see children suffering from hunger and disease and we still still see run down schools and we see young people without prospects for the future,” he said.

“Around the world today men and women are still imprisoned for their political beliefs and are still persecuted for what they look like and how they worship and who they are, that is happening today.

“There are too many people who happily embrace Madiba’s ( Mandela’s) legacy of racial reconciliation but passionately resist even modest reforms that would challenge chronic poverty and growing inequality.

“There are too many leaders who claim solidarity with Madiba’s struggle for freedom but do not tolerate dissent from their own people.

“There are too many of us on the sidelines comfortable in complacency or cynicism.”

Mr Obama shook the hand of Cuban President Raul Castro at a ceremony before giving his speech. It was an unprecedented gesture between the leaders of two nations which have been at loggerheads for more than half a century.

Mr Castro smiled as Obama shook his hand on the way to the podium.

The handshake stole the show at the memorial, a resonant tribute to a man who brought old enemies together and straddled ideological divides and eras. The gesture will not exorcise the Cold War ghosts haunting the Florida Straits, but it would have delighted Mr Mandela, who was nothing if not loyal to old revolutionary allies like Raul’s retired elder brother Fidel, who at 87 was too old to attend the memorial.

Had they been alive, Libya’s Muammar Gadafy and Palestinian leader Yasser Arafat would also have been at the Johannesburg stadium.

During his long career and even in the final years before his death Mr Mandela maintained unswerving loyalty to veteran revolutionaries shunned by the West such Fidel Castro, Gadafy and Arafat, who had supported his lifelong fight to overturn apartheid in South Africa.

Mr Obama’s handshake with Raul Castro was a spontaneous gesture of greeting and went no further than pleasantries, a White House aide said today. “Nothing was planned in terms of the president’s role other than his remarks,” Deputy National Security Adviser Ben Rhodes told reporters traveling with Obama.

Thousands of ordinary South Africans have gathered for today’s memorial in honor of the former South African president and freedom fighter Mandela, who died on Thursday night.

South African President Jacob Zuma was jeered by some of the crowd as he spoke earlier. A series of scandals weigh on Mr Zuma’s popularity before elections next year. While there was a roar of welcome for former President Thabo Mbeki as he entered FNB stadium in Soweto, near Johannesburg, boos greeted Mr Zuma (71) with some people in the crowd making rolling hand signals used to signal a substitution at soccer matches.

Mr Mandela died on Thursday at the age of 95.

He served 27 years in jail for fighting apartheid, and after his release in 1990 he helped negotiate the end of white-minority rule before taking over as president in 1994. During his imprisonment,

Mr Mandela, known as Madiba, was seen as the symbol of the struggle against apartheid and later promoted racial reconciliation. Mr Zuma (71) who won control of the ANC from Mr Mbeki in 2007, became president in 2009 just weeks after prosecutors dropped charges against him for allegedly taking bribes from arms dealers. He fathered a child with a friend’s daughter, while an Indian family he counts as friends secured access to a high-security air force base on April 30th to transport guests to a wedding. Mr Zuma was acquitted of rape charges in 2006.

Cyril Ramaphosa, the ANC’s deputy leader and the master of ceremonies for the service, urged the crowd to exercise restraint and discipline as Mr Zuma was booed for a third time.

The crowds earlier sang God Bless Africa — Nkosi Sikelel’i Afrika — at the ceremony got under amid driving rain in Soweto.

Mr Ramaphosa welcomed leaders from countries around the world. “We wish to applaud the people of South Africa for the dignified manner in which they have honoured and remembered the memory of Nelson Mandela since he passed away. We applaud you and thank you for it,” he said at the start of the service.

1 Harry and Meghan will no longer be working members of British royal family
2 Mary Lou has to call for the smelling salts as SF councillor deals a knock-out blow
3 Dublin gangland figures involved in Drogheda feud that killed 17-year-old
4 Peter Casey on the campaign trail: ‘My ideal job would be minister for health’
5 Election 2020: Sligo-Leitrim constituency profile
Real news has value SUBSCRIBE