Ebola has killed 672 people in Guinea, Liberia and Sierra Leone since February 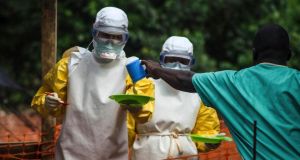 Medical staff working with Medecins sans Frontieres (MSF) prepare to bring food to patients kept in an isolation area at the MSF Ebola treatment centre in Kailahun, Sierra Leone. Ebola has killed 672 people in Guinea, Liberia and Sierra Leone since it was first diagnosed in February. Photograph: Tommy Trenchard/Reuters

The Nigerian city of Lagos shut and quarantined a hospital yesterday where a Liberian man died of the Ebola virus, the first recorded case of the highly-infectious disease in Africa’s most populous country.

Patrick Sawyer, a consultant for Liberia’s Finance Ministry in his 40s, collapsed on arrival at the Lagos airport on July 20. He was put in isolation at the First Consultants Hospital in Obalende, one of the most crowded parts of a city that is home to 21 million people. He died on Friday.

“The private hospital was demobilised (evacuated) and the primary source of infection eliminated. The decontamination process in all the affected areas has commenced,” Lagos state health commissioner Jide Idris told a news conference. He said the hospital would be closed for a week and the staff would be closely monitored.

Ebola has killed 672 people in Guinea, Liberia and Sierra Leone since it was first diagnosed in February. The fatality rate of the current outbreak is around 60 percent although the disease can kill up to 90 percent of those who catch it. Highly contagious, its symptoms include vomiting, diarrhoea and internal and external bleeding.

In Sierra Leone, which has the highest number of Ebola cases in the current outbreak at 525, President Ernest Bai Koroma visited an Ebola centre in the northeastern district of Kenema.

An administration official said President Barack Obama was receiving updates, and noted that US agencies had stepped up assistance to help contain the virus.

Susan Rice, Obama’s national security adviser, said in a televised interview on Monday the outbreak was of “grave concern.”

“We are very much present and active in trying to help the countries of the region and the international authorities like the World Health Organization address and contain this threat. But it is indeed a very worrying epidemic,” Ms Rice told MSNBC.

Authorities were monitoring 59 people who were in contact with Sawyer, including airport contacts, the Lagos state health ministry said, but it said the airline had yet to provide a passenger list for the flights Sawyer used.

Derek Gatherer, a virologist at Britain’s University of Lancaster, said anyone on the plane near Sawyer could be in “pretty serious danger,” but that Nigeria was better placed to tackle the outbreak than its neighbours.

“Nigerians have deep pockets and they can do as much as any Western country could do if they have the motivation and organization to get it done,” he said.

Nigeria’s largest air carrier Arik Air has suspended flights to Liberia and Sierra Leone because of the Ebola risk, Arik spokesman Ola Adebanji said in an email on Monday.

David Heymann, head of the Centre on Global Health Security at London’s Chatham House, said every person who had been on the plane to Lagos with Sawyer would need to be traced and told to monitor their temperature twice a day for 21 days.

The World Health Organization said in a statement that Sawyer’s flight had stopped in Lomé, Togo, on its way to Lagos.

“WHO is sending teams to both Nigeria and Togo to do follow- up work in relation to contact tracing, in particular to contacts he may have had on board the flight,” spokesman Paul Garwood said.

Liberia closed most of its border crossings and introduced stringent health measures on Sunday, a day after a 33-year-old American doctor working there for the relief organization Samaritan’s Purse tested positive for Ebola.

Nigeria’s airports, seaports and land borders have been on “red alert” since Friday over the disease.

Exacerbating the difficulty of containing the virus, Nigerian doctors are on strike over conditions and pay.

The WHO said that in the past week, its regional director for Africa, Luis Sambo, had been on a fact-finding mission to Guinea, Liberia and Sierra Leone, which have 1,201 confirmed, suspected and probable cases among them.

“He observed that the outbreak is beyond each national health sector alone and urged the governments of the affected countries to mobilize and involve all sectors, including civil society and communities, in the response,” the WHO said.