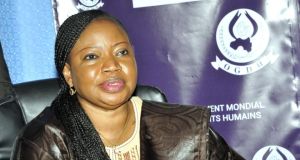 ICC chief prosecutor Fatou Bensouda: has written to the Kenyan ambassador to the Netherlands stating that she is “immune” from summons by the Kenyan judges. Photograph: Cellou Binani/AFP/Getty Images

The prosecutor at the International Criminal Court (ICC) has refused to appear before the Kenyan High Court, despite being summonsed in a case aimed at revealing a secret list believed to have named those allegedly behind post-election violence in the country in 2007 and 2008.

Fatou Bensouda has written to the Kenyan ambassador to the Netherlands, Rose Muchiri, stating that she is “immune” from summons by the Kenyan judges, who have “no jurisdiction” over her personally, over her office or over the ICC as an international institution.

The list was drawn up by Kenyan justice Philip Waki as part of his investigation into the violence. His findings were sealed and handed to former UN secretary-general Kofi Annan, who personally delivered them in July 2009 to the previous ICC prosecutor, Luis Moreno-Ocampo, in The Hague.

The documents were opened, read and examined by Mr Moreno-Ocampo and his team, including his deputy at the time, Ms Bensouda, before being resealed and stored in a high-security vault at the court’s investigations unit. “There will be no leaks,” Mr Moreno-Ocampo pledged then. “The contents will remain confidential.”

It has always been believed that the six boxes of documents formed a substantial part of the evidence used by the prosecutor to bring charges of crimes against humanity against six defendants, including President Uhuru Kenyatta.

Of those six cases, only two – against deputy president William Ruto and journalist Joshua Sang – have reached the trial stage. The case against Mr Kenyatta collapsed for lack of evidence last year after Ms Bensouda claimed she had been stonewalled by the Kenyan government.

The contents of the so-called “Waki List” have never been leaked, but could become public if the high court action filed on March 10th by two pro-Kenyatta activists is successful.