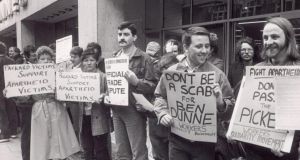 A protest outside Dunnes Stores on Henry Street in Dublin

In the early 1980s, when Nelson Mandela was still in captivity and had been out of the world’s view for decades, little was known about him by the general public in Ireland. But the practice of apartheid in South Africa was well-known and, on July 19th, 1984, Dunnes Stores worker Mary Manning refused to check out a customer’s South African fruit. She had been directed not to handle goods from South Africa by her union, Idatu.

Manning, then 21, was suspended. She went on strike outside the Henry Street shop, with 10 of her colleagues. One of them was Alma Russell.

“Politics would not have been top of my agenda before we went on strike; I was very young, only 18,” she recalls. “I was more into fashion and music and wasn’t really concerned about the rest of the world.

“I learned a lot about Nelson Mandela from South Africans who came to talk to us on the picket line. My impression of him in the 1980s was that he was a very strong person and a very principled person, because of the length of time he had given up his freedom for. The experience definitely made a political person of me.”

Product ban
In 1985, eight strikers and their union official, Brendan Archbold, flew to South Africa at the invitation of Desmond Tutu. They were not permitted to enter, but held under armed guard and deported on the next plane. This caused much media attention back home. The strike finally ended in 1987, when a ban was introduced on South African products by the Irish government. Three years later, Mandela was freed.

“When he was freed, I was looking at the television waiting for him to come out, and I remember he put his hand in the air, and I felt that I had some part in that day; a very small part, but a part,” says former striker Karen Gearon.

Cathryn O’Reilly, also one of the 11, recalls that day. “I couldn’t believe it. I never thought I’d see the day. Even though people were saying he was going to be released, you sort of thought it was a trick.”

When Mandela visited Dublin in June 1990, he was presented to nine of the former strikers (two were then living in Australia) at a lunch in the Berkeley Court Hotel. “The first thing I thought was how tall he was. He had a stature about him, and it was like he glided across the room. He had a huge presence, but a very gentle voice. I remember thinking his voice didn’t really match his stature. He shook our hands, and thanked us for what we had done,” Russell says.

“I was totally taken aback at how incredibly gentle he was for such a powerful man, and that is what I will always remember,” recalls Gearon. “Some years later, I went to South Africa on holiday, and I visited Robben Island. It was very eerie and almost personal to me in one way, because I had got to meet him by then.”

For O’Reilly, meeting Mandela “ . . . was better than winning the Lotto. You never expect to get the opportunity to meet the person you admire.”

She remembers him as “So charismatic, and so spiritual, somehow. He was not a small feeble man, which I thought he might be after spending so many years in prison. He was a very tall man. I was so in awe. You never think you are going to meet your hero.”

Cultural recognition
Manning did not meet Mandela, as she was not living in Ireland at the time. But there is a street named in her honour in Johannesburg (which she has yet to see), a Christy Moore song called Dunnes Stores that has her name in the chorus, and a plaque outside the Henry Street shop dedicated to “Mary Manning, a young Irish woman who led a strike against apartheid from 1984-1987.”