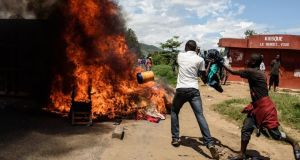 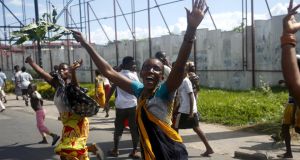 People celebrate in Bujumbura, Burundi, as crowds poured onto the streets on Wednesday, May 13th, 2015, to celebrate after a general said he was dismissing President Pierre Nkurunziza for violating the constitution by seeking a third term in office. Photograph: Goran Tomasevic/Reuters 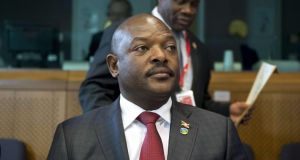 A Burundi army general said on Wednesday he had sacked Pierre Nkurunziza (above) as president for seeking an unconstitutional third term in office, but the presidential office quickly rubbished the claim. File photograph: Alain Jocard/AFP/Getty Images 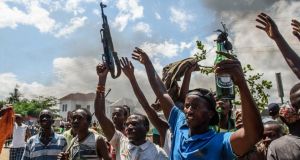 A man holds aloft a gun taken from a police officer and a man with a molotov cocktail gesture after clashes with police on May 13th, 2015 in Musaga, Bujumbura. Photograph: Jennifer Huxta/AFP/Getty Images

East African leaders have condemned what they called an attempted coup in Burundi on Wednesday by a general who declared he had deposed President Pierre Nkurunziza for seeking to run for a third term in office.

The summit’s host, Tanzanian president Jakaya Kikwete, made the statement after a meeting of leaders from the five-nation East African Community, which also includes Kenya, Rwanda, Uganda and Burundi.

A Tanzanian Foreign Ministry official said Nkurunziza had not attended the discussions and had left Tanzania for Burundi.

Maj Gen Godefroid Niyombare, who had earlier declared he had sacked Mr Nkurunziza, said in Burundi that the airport in the capital Bujumbura and other border crossings were closed.

The presidential office rubbished the declaration by Maj Gen Niyombare, who was fired by Mr Nkurunziza as intelligence chief in February.

“We consider it as a joke not as a military coup,” presidential aide Willy Niyamitwe told Reuters.

Crowds of people streamed onto the streets of Burundi’s capital, Bujumbura, cheering and singing after the announcement, and soldiers surrounded the state broadcaster’s building.

Maj Gen Niyombare made his declaration to reporters at a military barracks in Bujumbura, while the president was out of the country at an African summit tackling the political crisis in the country.

Maj Gen Niyombare, also a former ambassador to Kenya, was surrounded by several other senior army and police officers, including a former defence minister, when giving his statement.

More than 20 people have been killed since street protests erupted in the impoverished central African state more than two weeks ago, according to an unofficial count by activists.

The demonstrators say Mr Nkurunziza’s bid for another five years in office violates a two-term limit in the constitution and the Arusha peace deal, which ended an ethnically fuelled civil war in 2005 that resulted in the deaths of 300,000 people.

East African leaders and a top official from continental heavyweight South Africa were meeting in Tanzania’s commercial capital Dar es Salaam to discuss the crisis that has already spilled over into a region with a history of ethnic conflict.

South Africa’s foreign ministry in Pretoria said it was monitoring the situation in Burundi closely.

Western donors including the United States and the European Union have criticised Mr Nkurunziza’s decision to stand again for president.

The EU and Belgium had said they were suspending some aid, particularly support for the elections due to the violence. Burundi’s former colonial ruler Belgium had no immediate comment on the statement from the general.

More than 50,000 people have fled to neighbouring states amid the crisis.

The U. refugee agency UNHCR said the crisis was heading towards a “worst case scenario” that could see 300,000 people fleeing, some to other parts of Burundi and others abroad.