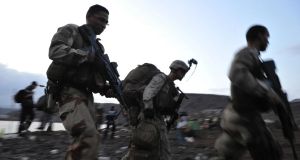 US marines arrive at the Gulf of Tadjoura beach in Djibouti, during a military drill. Photograph: Simon Maina/AFP/Getty

Djibouti is the only place where the navies of the world’s great military and economic rivals, the US and China, are moored alongside each other.

Since independence from France in 1977, this tiny republic of only about 900,000 people on the Horn of Africa coast has cannily employed its strategic and commercial relevance at the confluence of the Red Sea and the Gulf of Aden, overlooking a passage of water used by 30 per cent of the world’s shipping transiting from and to the Suez Canal.

In the process, it has transformed itself from a chunk of African desert only slightly larger than Wales, previously known for little other than French legionnaires, atrocious heat and a small ramshackle port, to a geostrategic linchpin with political clout far outstripping its diminutive size.

Nowadays it’s viewed as offering some of the most prime military real estate in the world, both to counter piracy threatening that key shipping lane – since peaking in 2011, when 151 vessels were attacked and 25 hijacked, piracy has steeply declined – and to shore up regional stability.

One foreign diplomat referred to Djibouti as “an oasis in a bad neighbourhood”.

In 2014, the US military agreed a 10-year extension to its presence – with an option to extend for another 10 years – including Camp Lemonnier, its African headquarters.

US president Barack Obama described the camp as “extraordinarily important not only to our work throughout the Horn of Africa but throughout the region”.

China’s investment stock in Africa surpassed €26 billion in 2014 – 60 times more than 2000 levels – while over a million Chinese are thought to have migrated to the continent to seek out economic opportunities.

At the same time, ever-thirsty for crude oil, China wants to shield its heavy dependence on imports from the Middle East that south of Djibouti pass from the Gulf of Aden into the Indian Ocean and then on to the South China Sea.

Previously in 2014, China negotiated an agreement allowing its warships to dock in Djibouti’s main port, before this February finalising plans for a new base in Obock, a northern port a couple of hours by boat from Djibouti city across the Gulf of Tadjoura.

About 10,000 Chinese personnel will occupy the base once completed. Foreign military stationed in Djibouti – also including personnel from the likes of France, the Netherlands, Spain and Japan – already number 25,000, according to some estimates.

“We’ve been criticised for working with the Chinese, but they are doing business everywhere, it’s not just with us,” says Mohammed Ali, the Djibouti foreign ministry secretary-general.

“And if other countries are not investing here what do you want us to do?”

Djiboutian president Ismail Omar Guelleh chose to overlook protests about the China-Djibouti deal in the wake of €10.5 billion of investment from Beijing for new ports and airports rising from the sands, and what is being touted as the biggest and most dynamic free-trade zone in Africa.

Such are Djibouti’s grand ambitions there is talk among some of it becoming an African Dubai or Singapore.

“We know what is on their shopping lists, and they could be coming here instead.”

South of the city’s so-called European quarter, with its French-colonial-inspired architecture, and orderly avenues and boulevards, lies the dustier and more ramshackle African quarter.

For now. Already local Djiboutians express mixed feelings about accelerating bids for modernity and transformation, questioning who will actually benefit, and fearing what could be lost.

“I worry about how this may change our customs – the traditional clothing, food and decorations that symbolise our identity,” says an elegant Djiboutian professional in her early 30s, her hair covered in the Muslim style, as the sun dipped behind the original old port in the distance.

And not everyone is happy with Djibouti’s current strategic and economic upswing – chugging along at a healthy 6 per cent a year, and likely to surpass 7 per cent this year amid the construction boom.

Some locals speak of a country run by a business-savvy dictatorship that has reaped profits from its superpower tenants while not doing enough to relieve widespread poverty.

Having signed an initial 10-year lease for the base, China will pay €17.6 million per year in rent. The US pays €55.4 million a year to lease Camp Lemonnier.

“The government only cares about how to collect the country’s wealth,” says a Djiboutian journalist previously arrested for reporting domestic issues.

“They do not care about freedom of expression, human rights, justice and equal opportunities of people.”

Dreams of a Dubai-type future have little relevance for most local Djiboutians, 42 per cent of whom live in extreme poverty, while 48 per cent of the labour force are unemployed, according to 2014 figures.

Whether the government uses the windfall from the Chinese base, along with other increasing gains from this rentier economy, to invest in Djibouti’s human capital to alleviate such rampant poverty remains to be seen.

Meanwhile, ships glide to and from the ports, where cranes offload containers to waiting trucks late into the night under arc lights.

Djibouti’s location has always been its most precious resource – devoid of a single river or the likes of extractable minerals, it produces almost nothing.

Nevertheless, for nearly 150 years, it has attracted armies, mercenaries, smugglers, gunrunners and traders: anyone and everyone concerned with the movement or control of merchandise – and that only seems set to increase.

Next in the military base pipeline could be a Russian one, although Djibouti did turn down a request from Iran’s military.

Some talk of Djibouti’s role in helping to shape a new world order as superpowers jostle for strategic realignment in a changing world.

It’s all a far cry from the assessment by the writer Evelyn Waugh who, after visiting in 1930, lamented the “intolerable desolation” of Djibouti – then French Somaliland: “a country of dust and boulders, utterly devoid of any sign of life”.