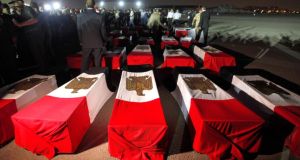 The caskets of 25 policemen killed early yesterday morning near the north Sinai town of Rafah lay on the ground after arriving at Almaza military airport in Cairo. Photograph: REUTERS/Mohamed Abd El Ghany


Muslim Brotherhood supporters braved an overnight curfew to protest against the deaths of 36 detainees being transported by police to Abu Zaabal prison near Cairo.

The Brotherhood-led anti-coup alliance called the deaths a “horrific crime” and demanded an independent commission of inquiry to investigate the incident. “The true account is not out yet, we have received three contradictory statements,” an alliance spokesman said.

The authorities initially claimed the prisoners had taken a guard hostage and tear gas had overcome them as police tried to free the guard. Later, it was said the prisoners were killed while escaping, and then that armed attackers had attempted to free them.

The men were arrested during Saturday’s clearing of the mosque in Ramses Square in central Cairo following protests against the dispersal of Brotherhood sit-ins demanding the reinstatement of deposed president Mohamed Morsi.

Irish diplomats visited a number of security facilities, including Tora prison on the outskirts of the city, in an unsuccessful attempt to locate the Halawa siblings, sisters Omaima (21), Fatima (23) and Soumaya (27) and brother Ebraheem (17).

The Halawas case is likely to feature in discussions in Brussels tomorrow when EU foreign ministers meet to discuss their response to the escalating crisis in Egypt. It is understood they are the only EU citizens detained over the weekend in Cairo.

Human Rights Watch has condemned the use of force by Egyptian security agencies to disperse Brotherhood encampments on August 14th, calling the operation “the most serious incident of mass unlawful killings in modern Egyptian history”.

‘Not justified’
It said reliance on live ammunition “reflected a failure to observe basic international policing standards on use of lethal force and was not justified by the disruptions caused by the demonstrations or the limited possession of arms by some protesters”.

The bodies of two dozen police officers were flown in military planes to Cairo yesterday after they were killed when rocket-propelled grenades slammed into minibuses in northern Sinai. The attack was the most deadly in the restive peninsula in recent years.

Egypt promptly closed the border crossing with Gaza. Hamas, a Palestinian offshoot of the Muslim Brotherhood, has been accused by Cairo of both aiding and taking part in strikes against Egyptians in Sinai. Egypt’s chief prosecutor has announced fresh charges against Mr Morsi related to violence against secular liberals protesting outside Ittiyadiya palace last December. A dozen people were killed during clashes.

The charges coincided with a statement by the lawyer for ousted president Hosni Mubarak, saying he could be freed within 48 hours if a corruption case is dismissed.

However, a judicial source told Reuters that Mubarak would have to remain in prison for at least two weeks before the final ruling is made on the case.