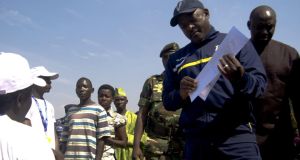 Pierre Nkurunziza’s decision to seek a third term had plunged Burundi into its biggest crisis since an ethnically charged civil war ended in 2005. Photograph: Evrard Benjamin/Reuters

Burundi president Pierre Nkurunziza on Friday won a third-term in office after the opposition boycotted the vote, a victory that leaves the east African nation politically divided and facing international isolation after months of unrest.

Mr Nkurunziza’s decision to seek a third term had plunged Burundi into its biggest crisis since an ethnically charged civil war ended in 2005. The opposition says Mr Nkurunziza’s bid violates the constitution.

Mr Nkurunziza won 69.41 per cent of the 2.8 million votes cast, winning handsomely in the rural regions where most of Burundi’s 10 million people live. His nearest rival, Agathon Rwasa, took 18.99 per cent of the vote.

African leaders and Western powers had called for the delay of Tuesday’s vote due to growing insecurity. Dozens were killed before the July 21st election, which saw weeks of demonstrations, a failed coup and clashes between rebel soldiers and the army.

Pierre Claver Ndayicariye, head of the electoral commission, announced the presidential results in a press conference in Bujumbura.

Regional leaders and Western diplomats fear Burundi could slide back into civil war if tensions are not resolved. That is a frightening prospects for a region scarred by the 1994 genocide in neighbouring Rwanda, where about 800,000 Tutsis and moderate Hutus were killed. Burundi has a similar ethnic makeup.

The United States has threatened to cut aid and the European Union said it was preparing sanctions.

More then 175,000 people have fled to neighbouring countries to seek refuge and the United Nations has warned more than half a million Burundians may end up leaving the country if the crisis persists.