David Bolam, a teacher, said to be safe and well after more than four months of detention 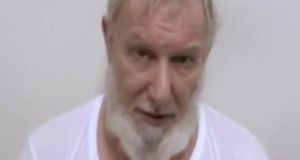 An undated video grab taken from YouTube of David Bolam, a British teacher who was held hostage by militants in Libya who has now been released. Photograph: YouTube/PA Wire.

A British man who had been held hostage by militants in Libya has been released.

The British Foreign Office said it was “glad that David Bolam is safe and well after his ordeal, and that he has been reunited with his family”.

“We have been supporting his family since he was taken,” it said.

Mr Bolam was releasd shortly after the killing of a British hostage, aid worker Alan Henning by Islamic State militants fighting in Iraq and Syria - the latest in a series of such murders which have been filmed and posted online.

The Foreign Office declined to comment further on the details of Mr Bolam’s case but British media reported that he had been taken hostage in May having left his home to go shopping.

In August he featured in a video posted online in which he pleaded for his life.

He was a teacher at an international school in the eastern Libyan city of Benghazi.

British media this reported that a ransom may have been paid to secure his release.

Libya is being racked by violence as the armed groups which helped topple Muammar Gadafy in 2011 turn their guns on each other in a struggle for the country’s vast oil resources and political domination.