Bodies ‘littered on the streets’ after Boko Haram attack on Baga 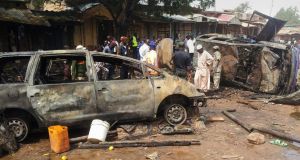 The aftermath of a Boko Haram bomb blast at Dukku bus rank in Gombe, Nigeria, in late December in which at least 20 people died and 18 sustained various injuries. In Baga the dead were said to be “littered on the streets and surrounding bushes”. Photograph: EPA

Nigerian Islamist militant group Boko Haram have attacked the northeastern town of Baga for the second time in a week, leaving bodies littering the streets, according to an official.

Two locals said the Islamist insurgents began shooting indiscriminately and burning buildings on Tuesday evening in raids on the civilian population that carried on into Wednesday.

More than 2,000 people are unaccounted for according to Musa Bukar, chairman of local government for the Kukawa district, which includes Baga.

The dead are “littered on the streets and surrounding bushes”, said Mr Bukar, speaking from a camp in the city of Maiduguri that is sheltering people who have fled the attacks.

On January 3rd, Boko Haram captured the headquarters of a multinational military force in Baga set up to combat the insurgency.

“I escaped with my family in the car after seeing how Boko Haram was killing people ... I saw bodies in the street. Children and women, some were crying for help,” Mohamed Bukar told Reuters after fleeing to the state capital Maiduguri.

The insurgency killed more than 10,000 people last year, according to a count by the Council on Foreign Relations in November.

It is seen as the gravest threat to Nigeria, Africa’s biggest economy, and a headache for President Goodluck Jonathan ahead of an election on February 14th.

Soldiers fled Baga over the weekend when the Sunni jihadist group overran a nearby army base.

The district head of Baga, Abba Hassan, said on Thursday that at least 100 people were killed when the group first took over the town on the edge of Lake Chad. Abubakar Gulama, who escaped without his family to Monguno, 40 km (25 miles) away, said he crossed “many dead bodies on the ground” and that “the whole town was on fire”.

Reuters TV footage showed scores of civilians waiting on sandy streets on the outskirts of Baga to catch buses out of town. Many carried the few possessions they had salvaged, such as bags of clothes and rolled up mattresses. In the last week, around 2,000 Nigerians and 500 Chadians have fled Boko Haram attacks in Chad’s Lake region, Chadian Prime Minister Kalzeubet Pahimi said on Wednesday.

A source at a rights group in Maiduguri said some 10 women who snuck out of Baga a few days after the first attack had reported that their daughters aged 10-20 had been kidnapped. The militants have been waging an insurgency to establish an Islamic state for more than five years.

The number and scale of attacks rose sharply in 2014 after the government imposed emergency rule on the three worst-hit states in 2013, and the administration of the president has met growing criticism for failing to quash it.

The president defended his record on tackling Boko Haram at the launch of his election campaign and blamed opposition candidate Muhammadu Buhari for Nigeria’s ill-equipped army.

Boko Haram has taken over or rendered ungovernable swathes of the northeast, especially Borno state where Baga is located.

It has also launched attacks in Chad and Cameroon, while Chad has appealed for international aid to support the refugees coming across its border.