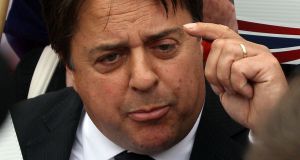 The far-right politician claimed the 94-year-old former South African president oversaw the transformation of his country from a “safe economic powerhouse” under the racist Apartheid regime to a “crime ridden basket case”.

He also seemed to mock the lung infection which has hospitalised the Nobel Peace Prize-winner.

In a series of tweets he wrote: “Saint @nelsonmandela on last legs it seems. Make sure to avoid BBC when the murdering old terrorist croaks. It’ll be nauseating.”

“No surprise @Mandela’s lungs are shot — all those burning tyres. Smoking necklaces very bad for the health.”

Mr Mandela served 27 years of a life sentence in prisons including the infamous Robben Island for sabotage and conspiracy against the oppressive South African Apartheid regime.

He was released in 1990 and was elected president of South Africa four years later in the country’s first free and fair elections. Many people took to Twitter to criticise Mr Griffin’s comments.

Ruth Rosenau, a Labour councillor in Stoke-on-Trent, tweeted: “@Mandela — a towering figure in world history & an inspiration to millions. Nick Griffin — what will you be remembered for?”

Bob Woods, who tweeted from BrummyTaff, said: “@NickGriffin Insults @Mandela & shows what a small minded odious irrelevant little man he is. Not fit to tie his laces.”