Cyril Ramaphosa, the new leader of South Africa's governing ANC party, said on Thursday (December 21) he aims to stamp out corruption in his country. 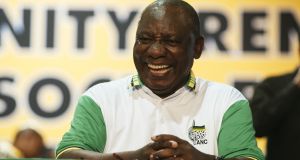 The African National Congress has clipped the wings of its outgoing president, Jacob Zuma, who remains South Africa’s leader, by adopting a resolution that states the ruling party’s top decision-making body will become its centre of power.

Although Mr Zuma stood down as ANC president earlier this week following the ruling party’s five-yearly elective conference, he remains the head of state until the general election in 2019.

This situation has created two centres of power in South Africa, with Mr Zuma in charge of government and his successor as the head of the ANC, South Africa’s deputy president Cyril Ramaphosa, leading the former liberation movement.

The two men appear to be on a collision course because Mr Ramaphosa promised to tackle widespread corruption in the ANC during his election campaign, while Mr Zuma stands accused of fraud, bribery and money-laundering on a grand scale.

Mr Zuma’s preferred candidate to succeed him was former government minister Nkosazana Dlamini Zuma, his ex-wife. But she lost out earlier this week to Mr Ramaphosa in the presidential vote at the ANC’s 54th national conference in Soweto, Gauteng Province, by a slender 179 votes.

In an apparent bid to avoid future tensions between the ANC and the government, it was revealed on Wednesday evening that the ANC’s commission on strategy and tactics had undertaken to resolve the centres-of-power issue.

Police minister Fikile Mbalula told reporters that the ANC’s 86-person national executive committee (NEC), which is its top decision-making body, would manage the relationship between the party’s new leader and the South African president.

He added that the conference had concluded the NEC would decide whether or not Mr Zuma, who has corruption charges pending against him and is deeply unpopular with the electorate, would be removed from office.

The new make-up of the NEC was to be announced late on Wednesday night, and Mr Ramaphosa would need to have at least 44 supporters in the body to push through his agendas.

Earlier on Wednesday, the ANC insisted the integrity of the elective conference remained intact despite a voting controversy emerging on Tuesday over the validity of the result for ruling party’s new secretary general position.

The Free State Province’s premier, Ace Magashule, who supported Ms Dlamini Zuma’s candidacy for president, was elected secretary general of the ANC by 24 votes over his rival, former KwaZulu-Natal ANC chairperson Senzo Mchunu, who is aligned with Mr Ramaphosa.

However, it subsequently transpired that 68 votes for the position from regions that were seen as strong backers of Mr Ramaphosa were “quarantined” by officials and not counted because of alleged irregularities.

In a leaked video, the ANC’s new president is seen asking his supporters to drop a legal challenge against the 68 disputed votes because he feared such an undertaking may compromise the outcome of the whole conference.

“We felt that what we must try to do is to protect the integrity of this conference. We must not allow the conference to degenerate into controversy and huge legal suits that will nullify the result that we’ve come up with,” Mr Ramaphosa said.

Supporters of Mr Magashule had warned that if the election result for the secretary general’s post was not accepted they would demand a recount for all top positions in the ANC, including the presidency.

Mr Ramaphosa accepted the outcome was not what they had wanted. However, he insisted the result had given his group “a beach-head to start the process of reinstalling the values of the ANC”.

The ANC’s elective conference was scheduled to end on Wednesday evening.