Africans say heads of state should not be tried at ICC 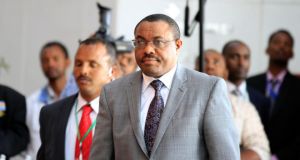 Ethiopian prime minister Hailemariam Desalegn arrives for the extraordinary session of the African Union’s Assembly of Heads of State and Government on the case of African Relationship with the International Criminal Court (ICC), in Ethiopia’s capital Addis Ababa today. Photograph: Tiksa Negeri/Reuters

Africa has agreed that sitting heads of state should not be tried by the International Criminal Court where Kenya’s leaders are in the dock, ministers said before African leaders opened a summit today.

Foreign ministers of the 54-member African Union also called for deferring the cases of Kenyan president Uhuru Kenyatta and his deputy, William Ruto, after a meeting to discuss Africa’s relations with the court based in The Hague.

“It should be underscored that our goal is not and should not be a crusade against the ICC, but a solemn call for the organisation to take Africa’s concerns seriously,” Ethiopian prime minister Hailemariam Desalegn said in an opening address.

Leaders meeting in Addis Ababa at the AU headquarters are expected to endorse the recommendations hammered out by ministers in last night’s meeting that extended past midnight.

Following that session, Ethiopian foreign minister Tedros Adhanom said trying Kenya’s president and his deputy infringed on that nation’s sovereignty. The two men deny charges that they orchestrated a killing spree after a disputed 2007 election.

Frustration with the ICC has been growing in Africa because the court has convicted only one man, an African warlord, and all others it has charged are also Africans.

The ministers did not call for a mass walk-out from the court’s jurisdiction, however. Officials previously said that idea would be on the agenda but it did not draw broad support among the continent’s 34 signatories to the court’s Rome Statute.

Rights groups had urged African nations not to turn their backs on the court, which they say is vital to ending what they see as a culture of impunity in African politics.

Mr Hailemariam told gathered leaders that the court and the UN Security Council had showed a “double standard” in the way it treated Africa and said earlier African requests for deferring cases had been ignored.

“It is indeed very unfortunate that the court has continued to operate in complete disregard of the concerns that we have expressed,” he said.

Ethiopia’s foreign minister said a group led by the AU chair, now Ethiopia, with members from Africa’s five regions would press the UN Security Council to defer proceedings against Kenya’s leadership and the Sudanese president.

While the Kenyan politicians have cooperated with the court, Sudan’s Omar Hassan al-Bashir is now subject to an arrest warrant after dismissing charges of war crimes and genocide.

“We underscored that sitting heads of state and governments should not be prosecuted while in office,” Ethiopia’s Mr Tedros said, adding a one-year delay was being requested under article 16 of the Rome Statute.

Ministers called for using video links in the Kenyan trials to ensure leaders could carry on their official duties.

The court has yet to rule on whether Mr Kenyatta and Mr Ruto can be excused from large parts of their trials or whether they can participate by a video link. Proceedings, though not trials, against the two were underway before their March vote win.

“Demanding respect is the least Africa can do, but I also don’t like to see this mistaken for - as we have seen with some of the detractors of this exercise - that Africans are supporting impunity. We don’t,” Rwandan foreign minister Louise Mushikiwabo said.

Those comments were echoed by Ethiopia’s premier and others.

After wrangling over wording yesterday, one senior delegate described the result as a “good compromise”. Kenya said it had not sought a walk-out but said others had supported the idea.

Some Africans, including officials from heavyweights South African and Nigeria, had prior to the meeting indicated there was not broad backing for a walk-out from a court that received the backing of many Africans when it was set up.

“The ICC should expand its work outside Africa, but it does not mean that its eight current investigations in African countries are without basis,” Amnesty’s deputy director of law and policy, Tawanda Hondora, said in a statement.

Kenyan foreign minister Amina Mohamed said she was satisfied with the outcome of yesterday’s talks, adding that immunity for a sitting president was “a principle that has existed for a long time” in international law.

Lawyers for Mr Kenyatta asked yesterday that his trial on charges of crimes against humanity be abandoned, saying defence witnesses had been intimidated.

Mr Ruto went on trial in The Hague last month and Mr Kenyatta’s trial is due to start on November 12th.