No troops will be allowed to enter without government permission, says Burundi 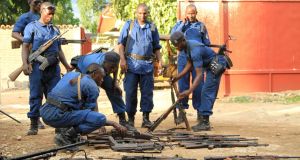 The African Union said it was ready to send 5,000 peacekeepers to Burundi to protect civilians caught up it a growing crisis, the first time the bloc has invoked powers to deploy troops to a member country against its will.

Burundi said on Friday no troops would get in without its permission. But its neighbours have grown increasingly alarmed about the violence in the central African state which the United Nations says is on the brink of civil war.

Tensions have been running particularly high since gunmen attacked military sites in the capital, Bujumbura, last week, unnerving a region where memories of the 1994 genocide in neighbouring Rwanda are still raw.

The African Union’s Peace and Security Council approved the force late on Thursday, a diplomat said – a decision which would still need to be backed by the UN Security Council to come into effect.

It also asked for a list of people who could face sanctions for compounding the crisis, he added, without going into further details.

“We have authorised the deployment of a 5,000-man force for Burundi whose mandate includes the protection of civilians . . . This resolution marks the first time the African Union decided to invoke its charter’s article 4,” the diplomat added.

Under that article, the bloc has the right to intervene in a member state “in respect of grave circumstances, namely: war crimes, genocide and crimes against humanity”.

Burundi’s government spokesman, Philippe Nzobonariba, said the force would not be allowed in without government permission. “They can’t invade a country if the latter is not informed and allow it,” he said on state radio. “It would be better if they go to those camps in Rwanda where troublemakers train.” The government has accused Rwanda of supporting rebels recruiting Burundian refugees – a charge Rwanda denies.

The UN says at least 400 people have been killed since April when President Pierre Nkurunziza’s decision to seek a third term in office triggered protests and a failed coup.

Hundreds of thousands have also fled the worst violence to hit the country since it emerged from an ethnically charged civil war in 2005.

Demonstrators said the president’s decision to stand in an election he eventually won broke constitutional term limits, while his supporters pointed to a court ruling allowing his bid.

Much of the latest violence appears to be along political divides. But diplomats fear a prolonged conflict could reopen old ethnic rifts. The civil war pitted the army, which was at the time led by minority Tutsis, against rebel groups of the Hutu majority, including one led by Nkurunziza – an ethnic split mirrored in Rwanda.

The African Union diplomat said the mission – the African Prevention and Protection Mission in Burundi – would be made up of troops from the existing the East African Standby Force. – (Reuters)