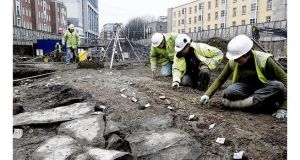 Archaeologists from Margaret Gowen Co comb through the site at Hammond Lane, off Church Street, just north of the Liffey. It is hoped to establish that a "Hiberno-Norse suburb" existed there. Photograph: Dara Mac Dónaill

DUBLIN’S NORTHSIDE is revealing its own Viking past with the first evidence of 11th-century Dubliners choosing to settle on the north shore of the Liffey emerging in the past week.

Clear signs of a late-11th century – ie Viking – house have been found at a site in the Smithfield area owned by the Office of Public Works (OPW). Excavation works, commissioned and funded by the OPW, have been under way at Hammond Lane, off Church Street, since last year.

Some 17th- and 18th-century artefacts have been found since then, while evidence of a “substantial Viking house” was uncovered there last week, said excavation director Colm Moriarty.

National Museum director Pat Wallace said the great significance of the find lay in the location of the house north of the Liffey.

The find would be of even greater importance if it could be demonstrated the house was part of a neighbourhood and not just stand-alone. “If it can be established that there was a Hiberno-Norse suburb north of the Liffey, that would be hugely significant,” said Dr Wallace.

Eleven archaeologists working onsite have dug down to reveal “latrines and ditches” as well as the holes in the ground into which hazel or silver-birch posts would have been thrust to make the “walls” of the house.

Mr Moriarty was yesterday able to point out where the 11th-century inhabitants would have entered the 7m by 5.5m dwelling, where they would have slept and, pointing at a discoloured patch of earth, where their hearth would have been.

“It’s possible they were involved in working with antlers, making combs and that sort of thing. We have found pieces of chopped and worked antlers. They could then maybe have sold them out on the street at the front of the house.”

The house is a “type one” Viking dwelling, as originally identified by Dr Wallace during his excavations at Wood Quay in the 1970s, with three aisles or sections. There is a central front entrance with the hearth and seating/sleeping areas on either side.

It fronts on to Church Street and sits almost adjacent to St Michan’s Church, which also dates from the 11th century. The street would have been a major thoroughfare into the city from the north.

“We are also finding some evidence of a dwelling next to this one, so it does look like there was some kind of organised settlement here.” Mr Moriarty said the excavation was nearing completion. There would be post-excavation analysis of the findings and he would then write up his report for the OPW. It will be sent on to the Department of the Environment.

There were no development plans for the site, said an OPW spokesman. “It remains to be seen what will be done there once this is completed.”