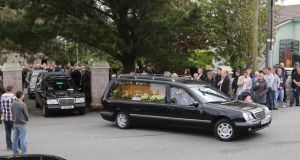 The sea may in a very short time have taken the lives of the three Bolger brothers, Paul, Kenny and Shane, but the love they left behind will endure and survive, mourners at their funeral Mass in Co Waterford heard yesterday.

The mourners who thronged inside and stood outside the Church of St John the Baptist in Crooke, near the men’s home in Passage East, heard Paula’s partner Colm O’Neill speak movingly of how the ties that bonded them as a family would not be easily sundered by the tragedy.

“But the love is not washed away, not of Calum, not of Rachel, not of Martha Kay, not of Patricia, not of Lucy, not of Michael, Anthony, Linda or Paula and not ever from Margaret,” said Mr O’Neill to a loud and appreciative applause from the mourners.

Great white puffs of cloud sent shadows sailing across the Suir estuary from Crooke to Hook Head in Co Wexford, but the sea itself was flat and calm beneath the June sunshine as mourners began to gather for the funeral in the cut sandstone church in Crooke that looks out on the sea.

The weather was in stark contrast to that last Wednesday when Paul (49), Kenny (47) and Shane (44) left nearby Dunmore East to go lobster fishing, only for the conditions to change and their 19ft punt, Dean Leanne, to be swamped and capsize with devastatingly tragic consequences.

Colm O’Neill spoke of how the three brothers, like most in the fishing community, wanted to be independent and provide for their families, and it was that love that led them to put to sea to earn a livelihood.

“This tragedy had its roots in a long descent into danger caused by the removal of economic opportunity again and again without alternatives being made possible. Successive governments have often, with good intentions, restricted or removed categories of fishery or types of fishing,” Mr O’Neill said.

“The Bolger brothers believed strongly in the dignity of work and the need to be independent and to support themselves and their families and this caused them to move into areas of great risk to fish in smaller boats and from stocks that were not restricted.”

Mr O’Neill said what was needed was greater government support for mariculture and tourism fishing so that fishermen would not have to take the risks that the Bolger brothers took to catch lobster for which, he said, they received just 5 per cent of the ultimate price it fetched in restaurants and hotels.

Mourners at the Mass, which was celebrated by local parish priest Fr Brian Power, also heard the Bolgers’ cousin, Michael Connors, speak of their professionalism as fishermen and how highly regarded and respected they were among the fishing community.

“If you were giving marks and grading fishermen and you were giving 100 marks, all three of them would be over 95 and that’s not just my thinking - that the whole fishing industry, because they knew them well.

“I’ve had calls from Donegal, from one end of the coast to the other - nobody would believe how well got they were, how well known they were - they left their home that morning to go out to fish and their boat would have been up to the mark with everything.

“And they proved that themselves by the fact that when they were picked up, they had their lifejackets on them - three fine fishermen gone from us, and if you were here where I am now and saw the pain on people’s faces - I can’t find words,” said Mr Connors.

Among those who came to pay their respects was Minister for Agriculture and the Marine Simon Coveney and the Bishop of Waterford and Lismore, Dr William Lee. President Michael D Higgins was represented by his aide-de-camp, Cmdt James Galvin.

Following the funeral Mass, Shane and Kenny were laid to rest in Crooke Cemetery before the family and friends made their way to nearby Faithlegg Cemetery, where Paul was laid to rest in his partner Patricia’s family plot.