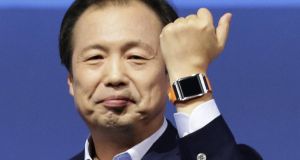 Calling Dick Tracy! One of the worst-kept secrets in recent tech history was officially revealed today in Berlin when Samsung unveiled its smartwatch, the Galaxy Gear.

“I believe it will become a new fashion item around the world,” said Mr JK Shin, Samsung CEO, clearly delighted to be one step ahead of arch-rival Apple - expected to launch a similar device next week.

The smartwatch has a 1.63-inch screen and camera with 70 apps ready at launch, including Evernote and Ebay.

Much of the smartwatch technology is hidden in its strap, including the microphone and speaker, requiring users to raise their hand to their head to make or take calls. The strap also contains a small camera while built-in voice recognition allows users to make phone calls using their voice.

The Galaxy Gear is not a standalone device, but a companion to the third iteration of Samsung’s Note smartphone-tablet hybrid and other Galaxy devices following a software upgrade.

The Galaxy Gear “reinvented a century old device”, the humble watch, with a battery lasting 25 hours on a single charge.

On the new multicoloured Galaxy Note 3, Samsung combined superlatives from the worlds of diet products and adult entertainment to promise a device that was “slimmer, lighter, larger, faster, longer”.

The devices will be launched on September 25th in 149 countries.

The company promised that its products would help users “achieve your passions and dreams, more easily, more amazingly every day”.