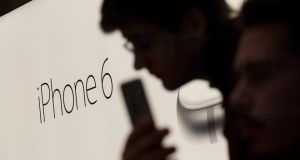 A customer holds a new iPhone in Madrid. The Department of Finance is said to broadly favour a pre-emptive move to unwind the tax scheme known as the “double Irish”. Photograph: Pablo Blazquez Dominguez/Getty

The EU Commission’s deepening inquiry into Apple’s tax scheme in Ireland has heightened the stakes for the Government as it examines the corporate tax regime ahead of the budget.

As the Government debates whether to unwind one of the most contentious tax rules, the commission declared yesterday in a separate case that Revenue conferred a “selective” advantage to Apple in tax opinions in 1991 and 2007.

The claim by competition commissioner Joaquín Almunia has been denied by the Government and Apple.

Apple insisted that there was no special tax deal. “Apple has received no selective treatment from Irish officials over the years. We’re subject to the same tax laws as the countless other companies who do business in Ireland,” said a statement from the company.

The Apple investigation intensifies pressure on the Government as it discusses whether to eliminate a separate tax arrangement known as the “double Irish” in the budget. This plays on the difference between Irish tax law and the law in other countries and is used by major Dublin-based companies, including Google, to lighten tax liabilities.

The Department of Finance is said to broadly favour a pre-emptive move to unwind the scheme. However, there is no consensus as of yet within the Government. It is acknowledged the fallout from the commission’s Apple investigation will affect the outcome.

The commission’s final decision might not be made for another 18 months and its ultimate findings will take account of formal responses from the Government and Apple. Any definitive adverse ruling against Ireland would be contested in Europe’s highest court so the final outcome could be years away.

In his initial assessment, Mr Almunia expressed concern that the taxable income in Ireland attributed to two Apple subsidiaries was too small. Citing official minutes of a meeting between Revenue and Apple, he accused the Irish authorities of “reverse engineering” tax opinions to help Apple minimise its bill.

The Government has always argued that the company did not receive special treatment and that Mr Almunia’s opening decision reflects “some misunderstandings”.