Teachers to ballot for strike action 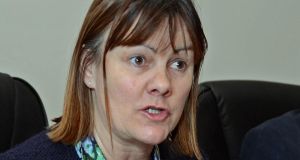 Sheila Nunan, general secretary of the INTO said that following the strong rejection of the Croke Park II proposals the ball was now in the Government's court. Photographer: Eric Luke/The IrishTimes

Teachers at primary, secondary and third level are to ballot for industrial action in protest at proposed pay cuts.

The decision to hold ballots for industrial action up to and including strikes is effectively a shot across the bows of the Government which is to decide in the next week or so on its reaction to the move by public service trade unions this week to reject the proposed new Croke Park II agreement.

Teaching unions have said that State exams this June will not be affected by any industrial action.

However should the Government mo ve to cut pay, there could be disruption in the classroom from September.

The Government has said it is reflecting on the decision by union members to vote against the Croke Park II proposals.

However the Minister for Public Expenditure and Reform Brendan Howlin has said the proposed €300 million saving in the public service pay and pensions bill, which was scheduled to come from the implementation of the Croke Park II agreement, will still have to be realised.

The decision to undertake the ballots on industrial action next month was taken at meeting of the executives of the three main teaching unions, Irish National Teachers’ Organisation (INTO), the Association of Secondary Teachers Ireland (ASTI) and the Teachers Union of Ireland (TUI) in Dublin today.

In a statement the unions said industrial action would be triggered “in the event of Government proceeding unilaterally to impose salary cuts or to worsen working conditions.”

Pat King, general secretary of the ASTI said: “Teachers have already taken a 14 per cent reduction in pay and have delivered additional work and substantial savings under the Croke Park Agreement. Young teachers, many of whom find themselves in precarious employment situations, have had inferior terms and conditions imposed on them in a most inequitable manner.”

Sheila Nunan, general secretary of the INTO said that following the strong rejection of the Croke Park II proposals the ball was now in the Government's court.

She said any move to unilaterally cut teachers' salaries or worsen working conditions would “ be strongly resisted up to and including strike action”.

TUI general secretary John MacGabhann said: “Teachers and lecturers objectively considered the LRC proposals and found them to be unbalanced and unfair. They hit those in part-time, lowly paid work hardest, are regressive and are now, deservedly, dead in the water. We have an existing agreement and will continue to honour it. We expect the Government to do the same. If they choose not to we will take whatever industrial action is necessary.”

Coroners nationwide facing backlog of inquests due to Covid-19 restrictions 19:51
National Missing Persons Day: ‘You don’t ever give up hope’ 19:40
Ryanair close to deal for discounted Boeing 737 Max aircraft 19:32
Wait for immigration renewals drops to 2-3 weeks – Minister for Justice 19:30
Covid-19 vaccination in Northern Ireland can start next week – Swann 19:19