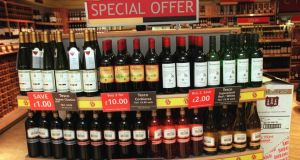 
The Government is to introduce a statutory code requiring shopowners to separate the sale of alcohol from other goods in their premises.

The change forms part of a long-delayed package of measures to tackle alcohol abuse which is due to be approved by Cabinet later this month.

However, there is still no agreement on the controversial proposal to ban sponsorship of sporting and cultural events by drinks companies. Ministers are still at loggerheads on the ban, with Minister for Health James Reilly supporting it and Ministers Leo Varadkar and Simon Coveney opposed.

Another controversial element of proposals from the Department of Health, a minimum unit price on alcohol, now seems likely to be included in the package. This follows a decision by the Scottish courts on Friday in favour of a similar proposal by the government there.

The new code for shopowners will replace a voluntary code agreed by the previous government with the off-licence trade, which has been heavily criticised by groups seeking tighter controls on the sale of drink.

The code would provide grounds on which objections to a trader’s licence could be lodged in the District Court at the time of renewal. Where objections are lodged, the licensee would be faced with the inconvenience and cost of court proceedings prior to renewal.

Minister for Justice Alan Shatter has already indicated that he is not in favour of retaining the existing voluntary code run by Responsible Retailing of Alcohol in Ireland Ltd.

The alternative of commencing legislation which requires shops to erect walls or similar barriers separating the sale of alcohol from the rest of the premises lead to practical difficulties and higher costs for small operators, in his view.

In a significant victory for health campaigners in Scotland, the Court of Sessions has rejected a case brought by the Scotch Whisky Association against the government’s plans for a 50p a unit floor on alcohol prices. However, legal uncertainty surrounding minimum price proposals is likely to remain as the association plans to appeal the case to the European courts.

The Government wants to “de-normalise” the purchase of alcohol by young people, Mr Shatter told the Dáil last year. “We must bring to an end some of the commercial inducements in place that encourage people to purchase and perhaps drink more alcohol than is wise.”

In 2008, a Government advisory group recommended the structural separation of alcohol products from other items in supermarkets, convenience stores and garage forecourts. The Intoxicating Liquor Act introduced that year provided for such a change, but Minister for Justice Dermot Ahern deferred commencement of this provision to allow the drinks industry implement its own voluntary code.

0:20 Homeless man in serious condition after tent lifted during canal 'tidy up'