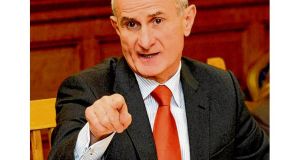 Martin McAleese at a press conference after the publication of the report investigating State involvement with the Magdalene laundries between 1922 and 1996. photograph: sasko lazarov/ photocall ireland

The State played a significant role in sending thousands of young women to Magdalene laundries, according to an official report published yesterday.

The interdepartmental committee report, chaired by Independent Senator Martin McAleese, has found that about 10,000 women are known to have entered Magdalene laundries since 1922 and the closure of the last institution in 1996.

The State referred or facilitated the transfer of at least 26.5 per cent of women to these institutions, based on available records. It also found direct State involvement in key areas such as the funding and inspection of the laundries.

It says the majority of women (61 per cent) spent less than a year there, despite a widespread perception that many spent most of their lives in these institutions. The average age of women at the time of entry was 24 years.

There was no evidence to support the perception that unmarried girls or women had babies in these facilities or that many of those admitted were prostitutes, according to the report.

The reality was “much more complex”, with women referred by State officials in the criminal justice system, industrial schools, social services, psychiatric hospitals or county homes. They accounted for 26.5 per cent of referrals.

In addition, many were categorised as “self-referrals” (16 per cent), while some women were also placed there by their families (11 per cent) or by priests (9 per cent). A significant number were also transferred from other Magdalene laundries (15 per cent).

In an introduction to the report, Senator McAleese states that many of the women found the laundries to be “lonely and frightening places” and for too long felt forgotten.

“For many of them, an inability to share their story in the years after their time in a Magdalene laundry has only added to the confusion and pain about that period of their lives,” he writes.

By today’s standards, the work environment was “harsh and physically demanding”, according to the report, and the psychological impact on these women was “undoubtedly traumatic and lasting”.

The vast majority of women who spoke with the committee, however, said the ill-treatment, physical punishment and abuse prevalent in industrial schools was not something they experienced in the laundries.

There is also evidence that the State directly or indirectly funded these institutions. In one facility, contracts from the Defence Forces and other State agencies accounted for almost a fifth of business.

Despite suggestions these institutions were highly profitable, the committee’s analysis of financial records indicated this was not the case. Most operated on a “subsistence or close to break-even” basis.

“The financial accounts tend to support the fact that, what came to be known as the Magdalene laundries, were historically established as refuges, homes or asylums for marginalised women, ” the report states.

It says that while many women referred by State authorities or services were aware of how long they were required to stay, this was not the case for many of those referred by groups outside the State, such as industrial schools or families.

“None of us can begin to imagine the confusion and fear experienced by these young girls, in many cases little more than children,” Senator McAleese writes, “on entering the laundries, not knowing why they were there, feeling abandoned, wondering whether they had done something wrong and not knowing when – if ever – they would get out and see their families again.”

The report notes the position of the congregations is that they responded in practical ways as best they could to the fraught situations of sometimes marginalised girls and women sent to them. The committee says it found no evidence to contradict their claim that they did not recruit women for these institutions.

While the congregations made their archives open to the committee, the group said it believed their refusal to do so for others was for legal or moral reasons, rather than secrecy or self-interest.

The committee found “no evidence” that “unmarried girls” had babies in laundries or that many of the women were prostitutes.

The laundries operated on a subsistence or break-even basis rather than being commercial or highly profitable.

Women and girls referred from industrial schools and non-State agencies would not have known why or for how long they were being sent.

Girls found themselves alone in a “harsh and physically demanding work environment”, and laundries were “lonely and frightening” places for many.