Will Carrickmines be a turning point in treatment of Travellers?

The long running dispute over the location of the temporary halting site for the families of the Carrickmines fire victims proved Ireland's sympathy only went so far. Kitty Holland reports. 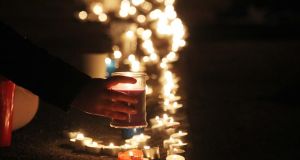 Vigil: candles lit in memory of the 10 people, including five children, who died in the fire at a halting site for Travellers in Carrickmines. Photograph: Stephen Collins/Collins 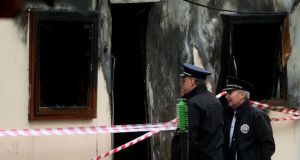 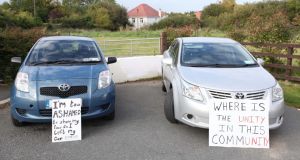 A government report on Travellers published some years ago described certain attitudes people had about the prospect of Travellers living next to them.

Travellers were “despised as inferior beings and are regarded as the dregs of society”, it read.

“Many feel that they would demean themselves by associating themselves with them. Their presence is considered to lower the tone of a neighbourhood and those who live in that neighbourhood are seldom satisfied until the itinerants have been moved on.”

The only indication that this report is more than 50 years old is, perhaps, its use of the term “itinerants”.

The 1963 Report of the Commission on Itinerancy was the first State policy document on Travellers.

A landmark publication, it set out the State’s attitude to Travellers and would inform national policy for the next 20 years.

Although there have been numerous policy documents, using more enlightened language – referring to human rights, ethnic identity and the need to value the diversity of Traveller culture – many Travellers today would argue that the 1963 report set a tone that persists.

It spoke of the “problem” of the “presence in the country of itinerants in considerable numbers” and of the “social problems inherent in their way of life”.

Rather than consider whether the “itinerant” culture could coexist with the settled community, it talked of how best to achieve their “absorption into the general community”, even giving serious consideration to the “solution” of “itinerant children being taken from their families and placed in institutions”.

In one generation, it said, “itinerants as a class would disappear”.

Given the strong bonds in Traveller families, however, it cautioned against this, explaining that any advantages would be negligible, given the “lasting legacy of bitterness” it could give rise to.

In 1998 the Housing (Traveller Accommodation) Act established the legislative framework that we have today, which mandates local authorities to draw up five-year Traveller accommodation programmes.

This legislation’s success is erratic, however, calling into question the degree to which policy on the ground has really changed, according to many Traveller advocates.

And events in Carrickmines this week have only worsened these fears.

Some had hoped that a glimmer of positivity could emerge from the appalling events last weekend. Ten people, including five children, died in a fire that engulfed a cabin and a caravan on a temporary halting site on Glenamuck Road, in south Dublin.

The families had been living on the site for eight years while they waited for a permanent site elsewhere.

The outpouring of sympathy in response to the death toll, which many suggested would have been lower had the two families been sleeping “in bricks and mortar”, led some to believe that a corner was being turned, that settled communities would think before instinctively objecting to plans for safe, appropriate Traveller accommodation.

As tributes were paid by the President, Michael D Higgins, Government Ministers and the Archbishop of Dublin, Diarmuid Martin, bouquets of flowers mounted at the entrance to the site of the fire.

Housing officials from Dún Laoghaire-Rathdown County Council immediately went to Southside Traveller Action Group, in Stepaside, to organise emergency accommodation for the 15 members of the extended Connors family left homeless by the fire.

On Monday morning, led by the council’s director of housing, Tom McHugh, officials set about identifying a location for the emergency site, planning to have it ready in three days, so the Connors could settle somewhere before the funerals.

A council-owned field about a kilometre farther down Glenamuck Road was decided on.

That afternoon the civil-engineering company Hegarty was contracted to send a digger to strip the field the following day, to ready it for four mobile homes, two outhouses with washing facilities, and boundary fencing.

Just after 11am on Tuesday the digger arrived in the quiet cul-de-sac, Rockville Drive, at the end of which was the field the council had in mind.

Each of the 44 houses received a circular from McHugh, to explain the plans. “Following the tragic fire which took place on Saturday morning I am writing to advise you of the decision made by [the] council . . . to provide a temporary, emergency halting site on the . . . lands at the end of Rockville Drive.”

He said that “in view of the emergency nature of the housing needs of the families left homeless by the fire” the housing department was using emergency powers under the Housing Act to use the site.

A permanent site had also been identified. The work on it, already under way, would take eight months – a time frame later reduced to six months.

“In light of the particular circumstances I am asking for your understanding, assistance and co-operation,” McHugh wrote.

A group of unhappy residents moved four cars across the entrance to the site, stopping the digger.

“It’s just not a suitable site for Travellers,” Mary Butler, a resident for more than 20 years, said. “It’s too small, and we’re already on top of each other here.”

Others, who would not be named, said, “We just don’t want them here,” and, “No one in the country would accept this.”

They said they had not been consulted and would not be “bullied”. They said there had been loud music and late-night bonfires on the previous site and that criminal activity had emanated from it over the years.

“They just don’t live the same way we do,” another resident said. “That’s not a slant on them. It’s just a fact.”

The events that followed – three days of talks between the council and residents about the six-month emergency site – illustrate the challenges that local authorities face in providing Traveller housing.

This amounts to 1,536 families in overcrowded or unsafe conditions.

These are too many, but they are relatively small numbers in critical need of housing.

Yet meeting their needs appears to be a challenge that local authorities can’t, or won’t, rise to.

Fifteen of the 31 local authorities this year drew down none of the money the Government had made available for Traveller housing.

Between 2006 and 2013 local authorities failed to spend €50 million allocated by the Department of the Environment for Traveller accommodation.

“Underspending” on Traveller housing is an ongoing issue, with local authorities’ own targets on provision continually being missed.

A review by the Irish Traveller Movement this year of the extent to which the then 34 local authorities had delivered on their commitments, under their 2008-13 traveller accommodation programmes, found just nine had fulfilled their targets.

Although, nationally, 2,564 units were promised over the five years, only 1,814 were delivered – a 30 per cent shortfall.

As Travellers wait longer for appropriate housing, more are giving up and turning to the private rental sector.

The highest proportion of families – 2,672 – are in this sector, leading many advocates to conclude that an unofficial policy of “absorption into the general community” still exists.

One Dublin local-authority housing manager, who has shepherded both Traveller and social-housing projects to completion, says that although there will “always be objections” to planned social housing, the objections to new Traveller housing “are of another level altogether”.

“People are also wary of any changes in their community, but the objections to Traveller housing are so strong that it can cause delays of years and can even prevent them happening at all.

“The objections raised are always the same: antisocial behaviour, dumping, and parties all night, bonfires, crime – all the things people read about in the media. The media do not help. They portray a very stereotyped picture of Travellers that just isn’t accurate about the vast majority of Travellers at all.”

Assuaging those concerns will be a long-term process. The most effective advertisements for further schemes, he says, are successful ones.

“The projects that meet the least opposition are where you’re extending or refurbishing sites that are already there. I always say, ‘Look to what you have already.’ ”

Traveller sources say that smaller sites work better than larger ones and that authorities must be careful about the families they place together in sites.

“Schemes need to be well designed in consultation with Travellers, well built and safe,” says Martin Collins, codirector of Pavee Point, the Traveller support group. They must be managed well, with refuse collection and caretakers.

Peter O’Brien, a Labour councillor in Dún Laoghaire-Rathdown, echoes this, stressing the importance of services, such as play facilities for children and proximity to parks, shops and schools.

“People know when they have been dumped out of sight, out of mind. That is a breeding ground for problems.”

Collins has called for the council to press ahead with its plans for the emergency site at Rockville Drive, obtaining an injunction if necessary.

The Connors family must be provided with emergency housing as a base from which they can “begin to piece their lives back together”, he says.

For the wider Traveller community, too, “housing is the linchpin”. Wider issues, such as health, mental wellbeing, education and employment, cannot be properly addressed until accommodation is dealt with. “Secure housing is a basic human right, a need. You can’t address other issues without it.”