Why ‘Grace’ was left in home key question in abuse case

Analysis: A critical decision by three members of health board remains unexplained 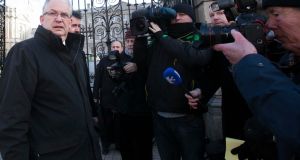 HSE director gereral Tony O’Brien at Leinster House, ahead of speaking to the Public Accounts Committee about the handling of abuse allegations surrounding a foster home in the southeast. Photograph: Leah Farrell/RolllingNews.ie

Three people, at a meeting in 1996, decided that a young woman with serious intellectual disabilities and who could not talk should stay in a foster home where, it is alleged, she was being subjected to torture, sexual abuse and the most serious physical neglect.

“Grace”, as she has come to be known, remained there for another 13 years, despite the fact that all new placements to the home had stopped amid concerns about these abuse allegations.

Why these South Eastern Health Board (SEHB) employees decided to leave Grace there remains the key unanswered question in this complex and appalling affair.

However, it was “countermanded” at a meeting of the three people, HSE director general Tony O’Brien told the committee.

John Deasy TD asked whether there was a minute of this meeting. Mr O’Brien said there was not, but it was “covered in the [unpublished] Conal Devine report”.

“There is very substantial information in relation to that event [in the report],” said Mr O’Brien. Based on his reading of the report, he had “very serious questions in my mind about that decision”.

What is known is that following the SEHB’s initial decision to remove Grace, the foster family, as was their right, appealed it.

Two representations that Grace be left in the home were made to the Department of Health, where Michael Noonan was then minister. One is thought to have come from the foster family, another from an educational setting.

The department in turn contacted the SEHB to find out about the case, though no suggestion is made that the department or minister had any role in the decision to leave Grace where she was.

Mr O’Brien was pressed on several occasions yesterday as to whether any of those involved in the decision-making, or omissions, was still working in child protection services. He was also asked whether anyone had been disciplined.

He said those three individuals, who made that critical decision in 1996, had all retired.

He said he could not discipline any employee yet. Any move to do so would be on the basis of the Conal Devine report findings, he said.

That report, commissioned by the HSE to investigate what happened to Grace, could not be published until a Garda investigation into alleged reckless endangerment by HSE employees was complete.

The question of whether Grace’s age was a factor in the thinking of those three individuals has not yet been raised.

In 1996 she turned 18, meaning she was no longer a child in foster care, but a vulnerable adult in a care setting.

And clearly they were going to be taken, until three people decided differently. We still do not know why.