Opinion: To describe someone as homophobic is to take their good name 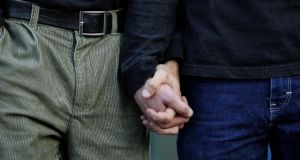 Are you now, or have you ever been, in favour of retaining the traditional meaning of marriage? Well, you now know that the most likely explanation for that mistaken view is homophobia.

Madonna says so, so it must be true.

For broadcast journalists, it’s simple. If a guest looks like he or she is going to defame someone, cut them off immediately. If the damage is done, make it clear straight away that these are not the organisation’s views.

What you don’t do is ask the guest to name names, and then helpfully supply them with the word homophobic.

Homophobia is defined in the Shorter Oxford Dictionary as “fear or hatred of homosexuals and homosexuality”, and in the public mind is often associated with hostility and sometimes with violence.

By any reasonable person’s standards, to describe someone as homophobic is to take their good name. There is a bright line between defamation and debate. Yes, those of us who were identified as homophobic could have decided not to pursue an apology and reparation, but with predictable results.

Already, people were terrified of going public with doubts about gay marriage, and I know two people told by their employers that to do so would threaten their employment.

Who would dare to oppose gay marriage, knowing that they would be constantly accused of homophobia?

It is normally the lunatic fringe that resorts to name-calling. Instead, Senators, TDs, MEPs, barristers, prominent columnists and the executive director of Amnesty International Ireland lined up, some to reiterate that we were homophobic, with the more subtle just inviting us to examine our consciences. All claimed we were stifling debate. For example, Senator Averil Power tweeted: “Really p****d off that Iona are getting TV licence fee money to help them promote discrimination & prejudice against LGBT people.” Makes me wonder why I campaigned to retain the Senate, if that level of invective now passes for fair comment.

I supported the decriminalisation of homosexuality, did not oppose the protections afforded by civil partnership and am in favour of guardianship rights in specific cases where two gay people are raising children. For this I was declared homophobic? Or because I said that every child has a mother and father, and that legislating to make that irrefutable reality irrelevant needs major debate?

Is it because I oppose giving constitutional backing to Minister for Justice Alan Shatter’s proposal to make “commissioning” a child through surrogacy and/or egg or sperm donation legally identical to a mother and father raising their own child? Why has no advocate of gay marriage condemned this proposal?

Or because I worry about these “commissioned” children being deliberately separated from one or both of their biological parents, a situation that anyone who watched Philomena should abhor? What about the equal rights of children to their kinship heritage?

But Rory O’Neill didn’t say you were homophobic in any serious way, people tell me. He said he was homophobic himself. He said it was impossible to avoid, given that we live in such a homophobic society.

Having confessed my own anti-Catholicism, with impunity I can now “out” some really nasty anti-Catholics, in their absence and at peak viewing time on television. If anti-Catholicism can embrace a spectrum ranging from internalised feelings of unease to beating up Catholics or imprisoning them and threatening them with capital punishment under Islamic anti-blasphemy laws then anyone I label as anti-Catholic will automatically be much further along the spectrum than I am.

Given my well-known advocacy position, does anyone think that my anti- Catholicism bears any resemblance to the anti-Catholicism I am accusing others of?

Odd that you can name in 10 seconds everyone writing for a national newspaper who disagrees with gay marriage, but it would take about a week to name everyone who agrees. Yet we are allegedly the dark, powerful force who control the media and the judiciary? It’s risible.

The sad thing is that until a month ago the only thing I had against Rory O’Neill was that he looks so much better in a dress than I do. Even sadder, voters are being told that there are only two reasons that anyone would vote no to gay marriage – either homophobia, or being such a chronic slow learner that you have not yet ascended to the dizzyingly oxygen-deprived heights of the moral high ground.

It sounds suspiciously to me as if you can vote any way you like so long as it’s yes. And if we do vote yes, one of the unintended consequences will be giving the approval of society to the kind of labelling and exclusion of dissent we have witnessed in recent weeks.