Too many men still suffering in silence - President 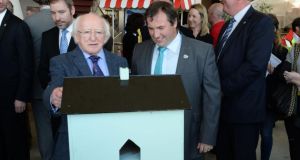 Far too many men are continuing to suffer in silence because of an inability to discuss their problems and this results in “alarming” rates of suicide among men, President Michael D Higgins has said.

He said there continued to be a profound reluctance amongst males to discuss problems, concerns and negative experiences because they did not wish to appear vulnerable in front of their families and friends .

“While we all want to see an Ireland where men feel comfortable to share their experiences and emotional difficulties with those close to them and be able to ask for help if they need it, we know that far too many men continue to suffer in silence,” he said. “Indeed it is alarming to know that the rate of suicide is five times higher amongst Irish men than amongst Irish women.”

Mr Higgins was speaking at the Irish Men’s Sheds Association conference at the Helix in Dublin. The Men’s Shed movement encourages people with time on their hands to work on a range of projects while enjoying the friendship of other men.The movement began in Australia some 20 years ago and there are now 220 Men’s Sheds in 19 counties in the Republic and Northern Ireland.

Mr Higgins said the physical isolation facing many Irish males, particularly those of an older generation living in rural areas, had been well documented and there were many obstacles for men wishing to participate in community life.

“For example, a return to significant levels of unemployment in this country in recent years has brought with it deep wells of despair and frustration, often leading to a damaging sense of futility and disengagement from society,” he said.

Men’s Sheds recognised and acknowledged a fundamental and deeply human instinct amongst an often-neglected cohort of our society for a space of welcome, friendship, and mutual support.

“Whether creating a community garden, revamping or repairing old vehicles, restoring beautiful furniture, building a boat or taking part in the many other activities undertaken by individual sheds around Ireland, members are not only benefitting their localities, while engaging in rejuvenation, re-invention and often the reconnection of citizens to the past and the heritage which binds them,” Mr Higgins said. “They are also sharing skills and learning new ones in a spirit of collaborative partnership.”

He said it was fascinating to see how many of the projects relied on skills and craftsmanship that were in danger of disappearing. “It is both enlightening and inspiring to be reminded of how such skills continue to contribute to society in ways that are significant and valuable. It is also uplifting to know that such skills and crafts continue to be handed on in a great spirit of community and generosity,” he said.

John Evoy, founder of the Irish Men’s Sheds Association said sheds were opening up at a rate of one per week. “Holding the International Men’s Sheds Festival here in Dublin, with the support of our Australian counterparts, is truly a testament to how quickly the movement has grown in Ireland, and worldwide,and that there is real demand for this resource in our communities up and down the country,” he said.

Mr Higgins looked at some examples of the work being undertaken by Men’s Sheds including a cannon dating from the 1798 rebellion which had been renovated by Enniscorthy Men’s Shed; a copper-making demonstration by North Belfast Men’s Shed; and a replica Tardis, the time machine from Doctor Who, which was created by Holywood Men’s Shed, in Co Down.