This sporting life: hurling emigrants return for one more game on home soil 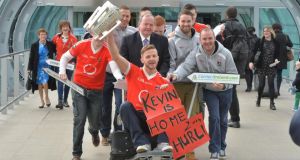 GAA President Liam O’Neill with Home to Hurl players Kevin Maher, on his arrival home from Melbourne, and fellow members of the Gornahoe Glengoole hurling team in Tipperary who have also arrived home for the charity match. Photograph: Alan Betson

Meet a GAA player who flies 10,000 miles across the world for a single game and you meet a spirit of determination. It is the lure of a winter’s match on a home parish field in defiance of an era of enforced emigration.

Yesterday, Kevin Maher came home. His return from Melbourne is not just for Christmas; it’s to allow him and other former teammates at Gortnahoe Glengoole to reconvene on Tipperary soil this St Stephen’s Day and play a present-day 15 not yet scattered by economic hardship.

In all, 19 former players, including Irish soccer international Shane Long and his brother Ogie, have returned for the Home to Hurl initiative in a county that has lost at least 600 club players in five years. Training began in earnest last night, even for a jet-lagged Kevin Maher.

“I would come back to Ireland in the morning if I could get work,” said the carpenter.

“Work just dried up. I ended up like most people here having to sign on and it’s just not a nice feeling. I would love to come home and give one more crack at hurling with Gortnahoe but to be honest I can’t see it happening in the next five, six years.”

William Coleman (30) is back now but lived in Perth in 2008. He recalls asking around and finding a small game in the city, not even a full team. Then about 70 eager new players arrived.

“We didn’t have enough hurls or helmets. [Players] were coming out of the woodwork.”

Home to Hurl is supported by both the GAA and ConnectIreland, which was established to offer financial incentives to intermediaries who arrange for companies, and jobs, to locate here.

So far they have secured 1,000 positions with an estimated €22.25 million value to the exchequer. The Government pays €4,000 per job to the company, a slice of which goes to the individual who set it up.

“Each of these 36 companies have come through an Irish person and each of them received a reward but it’s never about the reward, it’s about having a positive effect,” explained chief operations officer Joanna Murphy.

“We have lost a lot of players abroad. A lot of those want to come back . . . we want to be a part of bringing them home,” he said, explaining that schemes such as those operated by ConnectIreland can help do that.

“Confidence is sort of ebbing from communities. Jobs and young people will sustain a community because it is a life blood.

“Our mission anyway is to build communities in rural Ireland; it’s not just about games.”

In the meantime, while players detect a resurgent economy and the prospects of employment that come with it, there is also a sense of caution about moving home.

The secretary of hurling in Western Australia is a 32-year-old engineer from Tipperary. Jim Ryan and his Kilkenny partner Anita O’Keeffe have just bought a home and had a daughter, Ella.

Will they come home now? “I don’t know, especially now since I have a baby,” said Jim. “I always thought I would raise them in Ireland but I have a couple of years to think about it.”