‘They don’t live the same way we do, it’s just a fact’ 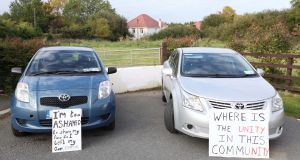 The residents, a mix of newcomers and older people born there, are proud of their street.

They held a communal barbecue over the summer. Neighbours call in on the elderly residents or head out to the shops for them.

When fire engulfed the halting site just a few hundred metres away on Saturday morning – claiming the lives of 10 Travellers, including five children – there was shock.

“You wouldn’t wish it on anyone,” said a middle-aged woman who, like most people, refused to give her name.

“We raised some money for the family and we sent a bouquet of flowers to the site.”

Then, on Tuesday morning, a large digger rolled down the narrow street. Council officials placed notices in their letterboxes to announce that emergency accommodation would be provided in the one-acre field facing on to the cul-de-sac.

Within minutes, many residents had blockaded access to the site with their cars.

They insisted they had not been consulted. The small site was inappropriate for the number of residents, they said.

More pointedly, they claimed the local area had been blighted by antisocial behaviour and sporadic criminality since the temporary halting site on Glenamuck Road was set up eight years ago.

“Speeding, stolen cars, crashed cars, [car] doughnuts out the back of the halting site at night, drinking, dogs, kids on the road, fridges and TVs left on the road,” said one woman in her 30s, who moved there five years ago.

“I’ve been on to the council about this stuff happening every month because of the halting site up the road.”

Another man in his early 40s said the community was simply standing up for itself instead of being bullied by the council.

“They don’t live the same way we do,” he said. “ It’s not a slant on them. It’s just a fact. We like houses, they like mobile homes.

“We like to sleep at night so we can get to work the next day. They like to light bonfires in the middle of the night. It’s the culture – and that’s fine, but in the right place.”

Most of the claims are rejected by local Traveller groups, who say the local site was carefully maintained.

Gardaí declined to comment on the claims, though one garda – who opted not to be named – confirmed they were “acquainted” with the site.

In its own way, the Rockville Drive protest is a striking tableau of contradictions and complexities that lie at the heart of the troubled relationship between the settled community and Travellers.

It has also exposed the often- hidden undercurrents of fear and suspicion that swirl around anything to do with providing Traveller accommodation in the community.

Latest opinion polls conducted in 2010 indicated there was a growing polarisation in public attitudes towards the community.

One in five would deny citizenship to Travellers, while three out of four would be would be reluctant to buy a house next door to a Traveller.

Fr Micheál Mac Greil SJ, a sociologist who has monitored changes in public attitude towards Travellers over the past 35 years, said the results were frightening.

“There is a negative mood out there,” he said.

For Martin Collins of Pavee Point, the response of locals reveals much about the real underbelly of society.

“There is, very simply, a deep-seated racism towards Travellers,” he said. “It’s so institutionalised and embedded in the psyche that it has become normalised and acceptable to say and do things to Traveller that you wouldn’t think or say to other community.”

The reality, he said, is the community is much more complex and diverse than many settled people realise.

“There is hypocrisy everywhere. I’m sure everyone will be shouting for Joe Ward if he wins his boxing match for Ireland. But how many will be behaving in a discriminatory way towards Travellers the following day?”

Politicians, faced with the balancing act of finding accommodation for Travellers and shoring up their local votes, come face-to-face with the complexities of the area more than most.

One TD, who declined to be named, said it was unfair to brand the wider settled community as being implacably anti- Traveller.

“The problem is when there is a fear of the unknown. It’s not just Travellers – it can be anything like the siting of incinerator, refugees or people with mental health problems. Anything which potentially affects people’s quality of life needs to be dealt with carefully.”

Few fears are acute as crime, Last week, at a meeting on rural crime in Thurles, many farmers and crime victims were quick to point the finger at Traveller gangs as being responsible for much of it.

The sentencing of seven men the previous week for the aggravated burglary on the home of Mark and Emma Corcoran was cited as an example.

“I heard that,” says Collins. “In that case, four of seven were from the settled community. But we don’t brand the entire settled community. Travellers don’t have a monopoly on crime or antisocial behaviour. To assume we do is dangerous and irresponsible.”