The Irish-American billionaire who gave away his fortune 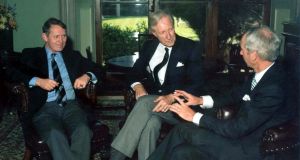 Chuck Feeney with Ed Walsh, then president of University of Limerick, and Frank Rhodes, president of Cornell, meeting in Plessy House, Limerick, in 1988 at the beginning of a process that would translate into hundreds of millions for higher education in Ireland.

“Chuck Feeney is what Donald Trump would be if he lived his entire existence backwards.” This comment, from one of Mr Feeney’s many admirers, Jim Dwyer of the New York Times, appeared on the dust cover of my biography of the philanthropist, published 10 years ago.

How apt, given the times that are in it, and especially now that the former duty-free billionaire has just achieved his life’s ambition of “giving while living”.

At a small ceremony in New York last month, Chuck Feeney and his foundation, Atlantic Philanthropies, approved a final grant of $7 million (€6.7 million), to his university, Cornell, in upstate New York, which was the recipient of his first donation in 1982.

To emphasise how serious he was about total giving, Mr Feeney once told Warren Buffett he hoped his last cheque would bounce.

The president and chief executive officer of Atlantic Philanthropies, Chris Oechsli, assured me the cheque to Cornell did not bounce.

In its 35-year lifetime, Atlantic Philanthropies (AP) has invested $8 billion (€7.6 billion) in philanthropy, much of it to construct university and hospital buildings and medical research facilities around the world, especially in the US, Ireland, Vietnam, Australia and South Africa.

However, in contrast to US president-elect Trump, whose name appears prominently on his commercial edifices, Mr Feeney has consistently refused to let any building he funded be named after him.

Asked if he would at last bow to pressure from various beneficiaries, including in Ireland, to allow his name on buildings and campuses, Mr Feeney replied, “I have not changed my mind.”

The reclusive 85-year-old philanthropist, an indefatigable world traveller – always in economy class and carrying his papers in a plastic bag – has settled down with his wife Helga to a modest existence in a rented apartment in San Francisco’s Bayside Village.

Now unable to travel for health reasons, he told the assembled AP staff and directors in New York via video link that he had been anticipating the final grant for many years, and that the donation to Cornell in upstate New York was a special moment for him.

“Our grants, now completed, are like sewn seeds which will bear the fruit of good works long after we turn out the lights at 75 Varick Street [AP New York headquarters],” he said.

Frank Rhodes, who was president of Cornell University when Chuck started his grant-making, described Feeney as “the most self-effacing and generous man I have ever met” who completely transformed his university.

Mr Rhodes said that everywhere one looked on the campus of Cornell, including its new faculty in New York, “you can see the evidence of Chuck”.

He recalled how Mr Feeney recruited him to advise University of Limerick then-president, Ed Walsh, on the development of the campus with funding from the foundation.

In 1984 the publicity-shy entrepreneur transferred all his wealth to his foundation, including businesses, properties and share-holdings, and began giving in strictly enforced anonymity.

The policy only changed when Atlantic Philanthropies became too big to remain under the radar.

In 1999 Feeney made the momentous decision to give everything away within a defined time-frame, something no major American philanthropy had ever done.

Asked why, Feeney said: “I cannot think of a more personally rewarding and appropriate use of wealth than to give while one is living.” He added with a chuckle, “It beats giving while dead.”

Other reasons he gave have entered Feeney folklore: “You can’t wear two pairs of shoes at a time” and “there are no pockets in a shroud”.

“Chuck’s gift to philanthropy is his challenge to high-net-worth individuals to apply both their wealth and their considerable personal skills to making a difference to people’s lives now,” Mr Oechsli said.

Mr Feeney became a role model for Bill Gates’s effort to get the mega-rich to sign a ‘Giving Pledge’.

“He is the ultimate example of giving while living,” said the Microsoft billionaire and philanthropist.

One of the unique aspects of Feeney’s model is that he could make “big bets”, exceeding the 5 per cent of capital to which major philanthropies restrict their giving.

Atlantic’s final such big bet is an investment of $600 million in a set of grants called “The Atlantic Fellows”, launched last year “to create fairer, healthier and more inclusive societies”.

This includes $177 million jointly to Trinity College Dublin and University of California in San Francisco, to create the Global Brain Heath Institute, designed to train a generation of leaders worldwide to treat and reduce dementia.

“As Atlantic’s largest-ever programme grant, it embodies our commitment to address global challenges with bold initiatives that will serve society for generations to come,” Mr Oechsli said.

Chuck Feeney once wrote, “Fortune doesn’t change a man. It only unmasks him.”

As Jim Dwyer noted, “He is the opposite of the grotesque consumption and excess that has been coursing through American society for decades, where ostentatious wealth is not something to be ashamed of but flattered.”

“Why do I need a Rolex when it tells the same time?”

He added, “I have a spare one. I’ll sell it to you.” I told him jokingly I couldn’t afford $10. He gave me the Casio anyway. It is still going, and telling the time accurately.

* Conor O’Clery is author of The Billionaire Who Wasn’t, How Chuck Feeney Secretly Made and Gave Away a Fortune.