The diaspora ‘one of Ireland’s strengths’, President says 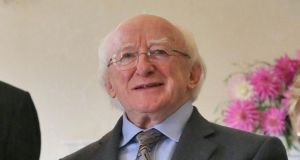 President Michael D Higgins said ‘as a nation we remain very conscious of the enormous debt of gratitude we owe to those who have left these shores over so many years, often reluctantly’. Photograph: Colin Keegan/Collins

People in Europe should never forget that their countries developed by exporting millions of their people to other continents, President Michael D Higgins said tonight.

He asked “can we be content with the current management of migration flows at global level, which sees migration to rich countries virtually blocked, leaving so many with no other option than to cross the Mediterranean, our Mare Nostrum turned mass graveyard, in highly perilous circumstances?”

He continued “what would have happened to the Irish people, had they been denied the possibility to emigrate to the New World in order to escape starvation at home in the mid-19th century? Today its diaspora is one of Ireland’s strengths.”

Speaking tonight at a ceremony for the Presidential Distinguished Service Awards for the Irish Abroad in Áras an Uachtaráin, he said “as a nation we remain very conscious of the enormous debt of gratitude we owe to those who have left these shores over so many years, often reluctantly”.

Minister for Foreign Affairs Charlie Flanagan said “tonight we shine a light on ten men and women whose passionate and selfless work has been of great benefit to the Irish people, communities and our nation as a whole. These people never look for our acknowledgement but tonight we recognise their endeavours which have been of tremendous service to our nation and helped build our reputation around the globe.”

Minister of State for the Diaspora Jimmy Deenihan said: “Tonight we are celebrating the diversity of the global Irish family... The recipients want the best for Ireland - for this small country with its global nation. And Ireland wants the best for each and every one of both the recipients and all our diaspora.”

Among the 2014 award recipients were Mary Allen, who has worked at the London Irish Centre since its foundation 60 years ago, Niall O’Dowd, founder of IrishCentral.com, the Irish Americans for Clinton campaign in 1991, and the Irish Lobby for Immigration Reform, and Dr Kevin Cahill, president-general emeritus of the American-Irish Historical Society.

Other recipients included Los Angeles-based actor Fionnula Flanagan; Irish-Australian novelist, playwright, author and commentator Thomas (Tom) Keneally, who won the Booker Prize for Schindler’s Ark; Fr PJ McGlinchey for his lifetime of charitable work on Jeju island off Korea; Catherine Day, who was appointed European Commission Secretary General in 2005; Colm McLoughlin, head of Dubai Duty Free; and Avril Conroy, who has done much work for the Irish community in Russia.

Also to receive an award was the late Jim Flaherty, Canada’s federal minister of finance from 2006 to 2014, and a longtime supporter of Irish projects. His wife Christine and their three sons received the award on his behalf.

Among the attendance at tonight’s ceremony was the Taoiseach Enda Kenny, Tánaiste Joan Burton, and members of the President’s Council of State.