Suicide rates are ‘stabilising’ after increasing during recession 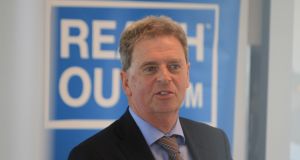 Ireland’s suicide rates are “stabilising” following a “significant increase” during the recessionary period, according to the director of the National Office of Suicide Prevention (NOSP).

There is a provisional figure of 459 suicide deaths from latest full-year statistics in 2014, which represents a reduction from 487 cases in 2013. However, those who work in the area of prevention are reluctant to herald any dramatic fall-off after the number of suicides spiked between 2008 and 2012.

“We’re looking at it more or less in the context of a stabilisation in rates,” Gerry Raleigh, director of the NOSP, said.

“There was a significant increase in suicide rates during the recession years. That tallies with national and international experience going back for years.”

The National Suicide Research Foundation (NSRF) research found almost 500 additional deaths between 2008 and 2012 were linked to the economic downturn.

Mr Raleigh said it was difficult to attribute the stabilisation to improved economic circumstances. “Suicide itself is a very complex issue. You can’t say it’s because of the economic environment that suicide rates are stabilising.

“Generally there’s a cocktail of factors that come into play which impact on people’s mental health and bring people into dark places where they make choices to end their lives,” he said, making reference to mental health issues, unemployment, addiction issues and social isolation.

Middle-aged males typically represent the highest risk category and Ireland has consistently ranked among the worst countries in Europe for suicide rates among men aged between 15 and 26.

International research indicates that clustering of suicides is most likely to reoccur in areas that have previously seen a sequence of potentially interconnected suicides over a short time period.

The Government’s suicide reduction strategy has “a commitment to work very closely with the regional suicide resource officers to be able to respond as quickly as possible to emerging suicide clusters”, said Dr Ella Arensman of NSRF. “That is a big change from where we were under the previous strategy.”

Meanwhile, the Mental Health Commission is concerned about reported attempts by the Department of Health to divert €12 million of €35 million of ring-fenced mental health funding for other areas.Chairman John Saunders has called for assurances from the Minister for Health that the money will be used for its original purpose.

If you or someone you know needs someone to talk to, contact the Samaritans on 116 123 or email jo@samaritans.org; www.yourmentalhealth.ie has a directory of mental health services. The number of Console’s 24-hour helpline is 1800-247247 or find your nearest Pieta House at www.pieta.ie