Steered away from a life of crime?

The Garda’s youth diversion projects work quietly with children on the cusp of offending, helping them to stay at school and out of custody 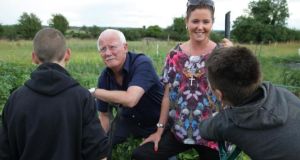 It must be the quietest milestone to be celebrated this year, but it is one of the most impressive. There are now more than 100 Garda Youth Diversion Projects around the country. They have never opened their doors to the media before.

The projects were designed to prevent children getting into crime. Or, as the director of the programme, Supt Colette Quinn, puts it, to prevent and interrupt destructive and criminal behaviour and to give young people an alternative.

The idea dates to 1963, when four gardaí decided to intervene in the soul-destroying cycle of youth crime. “I believe Charles Haughey initiated it,” says Quinn. The late taoiseach was minister for justice at the time. “Two guys were sent to Manchester to see what they were doing [about the problem] over there.”

The first of the modern projects was the Graft scheme, in Clondalkin, Dublin, in 1991. The Children Act (2001) put the projects on a statutory footing, and the scheme became part of the new Irish Youth Justice Service a few years later.The projects are administered by the Garda and run by Youth Work Ireland, Foróige and Catholic Youth Care, as well as by smaller organisations.

Three-quarters of the children referred to the projects are boys. More than half of the children have been issued with cautions, formal or informal. A formal caution brings a period of supervision with a junior liaison officer, a garda who deals with children who come up against the law. There are 123 of the officers, of whom eight are sergeants; the rest are of garda rank.

Half of the incidents that bring young offenders to the projects relate to alcohol – “the underpinning problem”, says Quinn.

At a time when public-service morale is subterranean, any outsider would be struck by how motivated everyone involved seems. “There’s not one of my staff that doesn’t go over their hours,” says Quinn, who adds that she doesn’t have to explain anything about the projects to Minister for Justice Alan Shatter, because “he gets it. He values it.”

Quinn would like a co-ordinated approach to reach across the public bodies concerned with troubled children. And she has exactly such an integrated, dynamic organisation in mind as a model: the Criminal Assets Bureau. “You can see that interagency collaboration is very effective there. It would be great to see that co-operation working in the best interest of the child, so that we were all working together instead of independently.”