Steady rise in racist incidents being reported by public 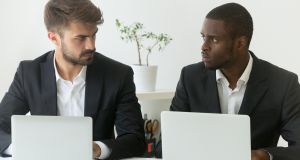 Crime and discrimination was experienced by people from 22 ethnic backgrounds, according to the report. File photograph: Getty Images

There is a continuing steady rise in violent race crime reported by the public, a report on racist incidents and behaviour has found.

It also identifies a general consistency in other types of racist incidents and discrimination and a lack of faith in the gardaí to tackle it.

Reports of Racism in Ireland, due to be published today by the European Network Against Racism (Enar) Ireland organisation, documents activity during the second half of 2017.

It identifies 256 incidents including 23 assaults, 35 cases of ongoing harassment and 113 of online hate speech.

Although the overall figure is down from 330 in the previous six months, mainly due to a reduction in online hate speech, it is the second highest level since Enar Ireland began collating data in 2013. Incident reports come from members of the public using the iReport.ie website.

Assaults have increased steadily in that time – from 12 in the second half of 2013, to 25 during the same period in 2015, and dropping slightly to 20 the following year.

Dr Lucy Michael, lecturer in sociology at Ulster University, who authors the biannual reports, said an emerging trend is the nature of violence.

“It’s become something unlike ordinary assaults; there is a pattern in Ireland now that is in common with other international context of extraordinary violence against minorities,” she said.

Dr Michael contends that while Ireland invested in efforts to combat racism and prejudice in the early to mid-2000s in order to avoid the experiences of other countries, funding later dried up.

In the second half of last year, there were reports regarding the publication of racist content in 10 Irish newspapers and allegations of hate speech from five politicians.

Crime and discrimination was experienced by people from 22 ethnic backgrounds. Men reported significantly more allegations of abuse than women, with the 25 to 34 age group the most commonly targeted. Most perpetrators are not believed to be under the influence of alcohol or drugs.

The report found 75 per cent of racist crime was committed by white Irish people, with one-third of discrimination cases relating to public sector staff.

“Racism has a demonstrable impact on the lives of those targeted,” it notes. “There is psychological impact . . . on their social connectedness, and financial impacts through for example increased costs or lost income.”

Of those cases reported during the period, 31 had financial implications as a result of people having to move house, avoid public transport, or from lost employment.

“Eighty-one reports were described as having a psychological impact on the victim,” it said.

One incident mentioned in the report regarded the hospitalisation of a student following an assault by other students in university accommodation.

The attackers had used racist language but were handed “a small fine for ‘minor disorder’ ”, the report noted, despite the victim suffering financial hardship as a result.

Other reports include a bus driver who initially refused to pick up a Muslim man until passengers forced him to stop. And a man asked to leave an NGO waiting room for speaking on his phone in Polish.

Funded in the main by Pobal, Enar Ireland is part of its parent European network co-ordinating civil society responses to racism and discrimination.

In his foreword, director Shane O’Curry said the iReport data was valuable in informing racist behaviour analysis given the relative lack of such information from State data.

The report also raises a lack of confidence in gardaí. The majority of incidents are not reported, it said, primarily due to the belief that little will be done to investigate.

Ashu Garg was on a bus in Dublin talking quietly on the phone to his children in the UK when he was slapped violently in the face. He remembers the woman, aged in her 40s, who had been staring at him from a nearby seat.

“After some time she just stood up and slapped me and said something,” he recalls. “But because I was on the call and I didn’t want my family to be panicked, I didn’t react.”

Instead, stunned by the sudden unprovoked violence, the 42-year-old Indian IT worker just sat there while his children continued to talk on the phone.

“She said, I don’t remember exactly, but it was something like: ‘why are you speaking in your language?’ And go back to where you come from.”

Shortly after, Mr Garg went downstairs to get off at his stop when he discovered the woman was still aboard. He confronted her, but she began shouting and pushing him.

When he got off the bus he called the gardaí but, as he outlined to the iReport.ie service, he was told they were “busy with serious crime” and would have to wait. A follow-up complaint the next day led nowhere, he says.

After the assault, he couldn’t sleep until about 3am, fixated on wanting “to know what was going through her mind”.

“Definitely [the experience of racist assault] puts you down. I have been very cautious since then,” he says. “I don’t speak on the phone when I am on the bus.”