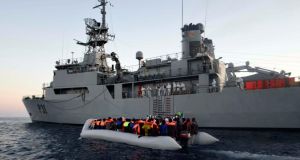 The LÉ Eithne in the Mediterranean. Photograph: Irish Defence Forces

The Government has agreed to accept up to 600 additional Syrian and Eritrean migrants over the next two years as part of a European Union relocation plan to deal with the migration crisis in the Mediterranean.

The Cabinet signed off in principle to the relocation scheme on Tuesday before a meeting of EU justice ministers on Monday in Luxembourg.

Ireland has opt-outs from most EU justice and home affairs legislation, but it is understood it will now opt in to the relocation initiative.

Britain, which also has an automatic opt-out, has ruled out participating in the scheme.

Minister for Justice Frances Fitzgerald travels to Luxembourg on Monday for the meeting of justice ministers at which agreement is expected to be reached on a new EU plan to redistribute migrants arriving in Italy and Greece across other EU member states.

With countries expected to set out how many migrants they are prepared to host, Ireland is to offer places to 600 migrants fleeing the troubled regions of Syria and Eritrea, though the final number may change in talks.

Any participation by Ireland in the scheme would need Oireachtas approval.

Amid strong opposition from some member states, including Hungary and Bulgaria, to a mandatory system of relocation, Monday’s meeting is expected to be contentious.

A meeting of justice ministers last Thursday failed to reach agreement, prompting a second meeting to be convened for Monday.

The EU is under pressure to present a cohesive response to the migration crisis, which has seen thousands of people lose their lives in the Mediterranean as they try to make their way from Africa to the southern shores of Europe.

Southern European countries such as Italy, Greece and Malta have long argued that they are struggling to deal with a crisis that should be shared between all EU member states.

Because the so-called Dublin convention states that migrants must seek asylum in the EU country where they first arrive, this will be the first time the EU has initiated a relocation scheme of this kind.

Under the initiative, migrants will apply for refugee status in the country where they first arrive, but the “host” country will process the application.

If agreed, the relocation legislation is likely to enter into force in September.

Ireland has been participating in rescue efforts in the Mediterranean for the past few months, with the LÉ Eithne rescuing more than 3,700 migrants since May.

The ship, which returned to Cork yesterday, is being replaced by the LÉ Niamh, which will remain in the Mediterranean until September.