Multibillion-euro plan will result in provision of 90,000 dwellings over next six years 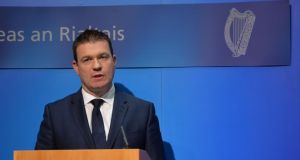 Some 90,000 households will “have their housing needs met” between now and 2020, Minister for the Environment Alan Kelly will announce this morning, as he sets out his long-awaited social housing strategy. This would clear the current social housing waiting list.

The Minister will announce a longer and more ambitious strategy than previously signalled, which will see the State move into position as the leading single provider of housing in the country.

As part of the strategy, all local authority estates will, from now on, be “mixed tenure”, in an effort to move away from the social ghettoisation that has characterised many local authority developments in the past and which continues to blight many estates, particularly in urban settings.

“The strategy will run to 2020 and it will be a complete reversal of policy – it will see the State becoming the key driver in direct housing provision in the country, and it will see 90,000 households coming off the social housing waiting list.

Suburbs of the future

“It will see social housing integrated side by side with affordable rented accommodation, which will mean a mixture of income groups living together.”