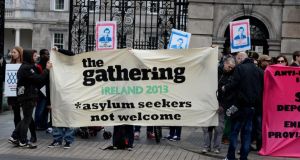 The system has been widely criticised by campaigners for providing cramped and in some cases sub-standard accommodation for up to 4,650 asylum seekers across 34 centres.

In all, it is estimated the State has spent at least €775 million on the direct-provision system which was established in 2000.

Of the 34 centres which provide accommodation – which include former hotels, hostels, a caravan park and a leisure centre – seven are owned by the State.

All centres are managed by private companies under contract to the State body responsible for asylum seekers’ accommodation, the Reception and Integration Agency.

The Department of Justice said it was not possible for commercial reasons to provide values for current contracts entered into by the agency.

However, it has provided figures which show the average daily rate per person paid to private contractors ranges from €15.50 in State-owned centres to €29.49 at commercially owned centres.

Direct provision
The direct provision rate for private operators is a single all-inclusive figure, which includes energy, maintenance, transport and Vat costs. By contrast, the State-owned rate does not include any of these costs.

While most centres are run by private firms, some are run by individuals, according to figures that were correct as of March this year.

Media queries
None of the operators contacted by The Irish Times opted to comment on the basis that their contracts required them to pass media queries to the Reception and Integration Agency (RIA).

In a statement, the agency said it took a number of steps to ensure accommodation was of a high standard.

“RIA constantly engages with its contractors to ensure that value for money is being achieved and that the contractor is complying with standards of accommodation, bed-usage, health and safety etc, as set out in contracts and in other legal provisions.”

The agency said it also had a complaints system across all centres, as well as an inspections unit.

There are a minimum of three inspections per year, carried out by the agency or by a commercial firm, QTS Limited, under contract to the agency.

The agency acknowledged that inspection can only be a “snapshot” of the physical conditions in the building, but added that all issues brought to RIA’s attention were investigated and remedied.

Nasc, the Irish Immigrant Support Centre, has said the system is failing to meet the needs of asylum seekers and called on Minister for Justice Alan Shatter to act.

Covid-19: 431 new cases and 12 further deaths reported 17:46
Brothers lose appeal over other siblings controlling mother's financial affairs 17:40
Data watchdog writes to Sinn Féin over collection of Facebook users’ information 17:39
‘They could have killed me’: Man pushed off bicycle while cycling at Sally Gap 17:32
Covid-19: Vaccination of vulnerable under-60s to resume 17:25