Spend of €2.34m on hotels for families so far this year

Expenditure of €750,000 a month on housing families in emergency hotel lodgings 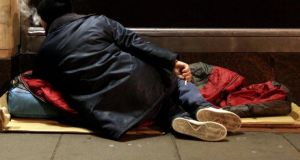 Among the 442 families homeless in Dublin in April, 174 were headed by couples and 268 by single parents. The total number of people in these families was 1,586. Photograph: Oli Scarff/Getty Images

Dublin’s four local authorities are spending almost €750,000 a month on housing families in emergency hotel accommodation, figures obtained by The Irish Times show. Spending on such accommodation has increased by more than 200 per cent since last year. The average expenditure each month this year is €586,341, and in March reached more than €750,000.

Figures obtained under Freedom of Information legislation show that so far this year, the Dublin Region Homeless Executive (DRHE) spent €2,345,368 on hotels, compared with €741,661 in the first four months of last year – an increase of 215 per cent. The figure compares with a total spend last year of €5.4 million on hotel accommodation for homeless families. At the same time, the number of families and dependent children in emergency accommodation climbed again last month.

The figures from the DRHE, which manages homeless services in the capital, show during the week of April 20th to April 26th there were 442 families with 970 children in emergency shelter, including hotels and B&Bs. This compares with 411 families and 911 children in March.

Among the 442 families homeless last month, 174 were headed by couples and 268 by single parents. The total number of people in these families was 1,586.